WSU vs. Cal: Inside the Golden Bears with California Golden Blogs

A question and answer session with the experts on the "Bear Raid" and all things Berkeley.

Share All sharing options for: WSU vs. Cal: Inside the Golden Bears with California Golden Blogs

With the California coming to Pullman on Saturday night for homecoming, let's check in with our brethren at California Golden Blogs to get a look at the Golden Bears from the people who know them best. Nick Kranz, boomtho and Leland Wong give us the lowdown.

CougCenter: It's Air Raid vs. Bear Raid, but I can't help but notice that Cal has run the ball more times than it has passed this year. How has the Bears' philosophy changed this year? (Or has it?)

Nick Kranz: The philosophy hasn't changed, it's mostly that Cal is actually capable of implementing that philosophy on the field. Sonny has always preferred a near even balance between run and pass, but last year they simply didn't have the offensive line or running backs to have a chance with a balanced offense. That and Cal was playing with a 21 point deficit 5 minutes into each game every damn time last year.

The big area of growth is in the offensive line, which is finally healthy AND experienced, and in starting RB Daniel Lasco, who has grown significantly in his ability to hit the right hole and fight his way through first contact.

boomtho: Like Nick said, the philosophy hasn't changed. Dykes and Franklin had nearly a 50/50 split at La Tech, and we only didn't achieve that last year because the run game was so poor and we were behind in so many games early. Now that the OL is better and the backs are seeing the field better, we are running much more often and effectively.

Leland Wong: I think we'll all agree with Nick here. Despite its roots in the Air Raid, the Bear Raid was never about being a pass-heavy scheme. Getting a group of five guys to become a cohesive unit and a force has allowed the coaches to get closer to the balance they envision for the offense. Both Lasco and Khalfani Muhammad are also doing their part to bring potency back to our run game by becoming stronger runners who are each more likely to break that first tackle and get the ball moving (Lasco especially).

What the hell is a Cal?

Clearly you have made your way to CougCenter to get some last-minute knowledge on your opponent. This is not that guide.

Let's explore the Cougar offensive line, how they are pass blocking much better than the national stats indicate, and how this is an opportunity to take another step forward.

What the hell is a Cal? Interactive Graphic: Previewing WSU vs. Cal

CougCenter: One could make the case that Cal has been the most explosive offense in the Pac-12 so far. Why have the Golden Bears been able to hit so many big plays?

Nick Kranz: It's a combination of having the deepest pool of wide receivers in the conference, and having Jared Goff. I don't know if any one of Cal's wideouts will blow you away with his talent. Their aren't any Keenan Allens or Marquise Lees on the roster, but Cal has at least six receivers that are legit Pac-12 starter quality players, plus with solid options out of the backfield.

With that much depth of talent to throw to, all you need is a good QB, and Jared Goff can pretty much make all of the throws. It's been fun to watch.

boomtho: Jared Goff and the skill players are the main reason. Goff has a remarkable ability to throw deep balls with great touch and our receivers, in particular Lawler, Davis, and Treggs, are fast enough and skilled enough route runners to create separation. Lasco has really come on in the last two weeks as a major threat out of the backfield as well.

Leland Wong: I think that's also part of having the mad genius Tony Franklin running the show. Sometimes it feels like every play-regardless of the down, distance, or time left on the clock-has at least one receiver running a deep route. Couple that with a fleet of receivers (who each have great speed and route running ability) and a quarterback who can pick apart the coverage and we're basically a big play waiting to happen. And with so many stellar receivers, if the defense starts to focus on one Bear with double coverage, then that'll open things up for another player to make a big play.

CougCenter: Last year was pretty rough on Sonny Dykes, to the point that it seemed his future already was being questioned. Are you feeling better?

Nick Kranz: Absolutely. Most fans were pretty sure that injuries and transition issues were to blame for most problems, but there was always that nagging doubt that maybe the entire coaching staff was totally overwhelmed. It's nice to know that, at the very least, the offensive staff is who we thought they were.

boomtoh: Definitely feeling better. Like Nick said, the injuries and defensive coaching was so bad last year that it was only a small portion of the fanbase that called for Dykes head. One part that Nick didn't mention is Dykes came in preaching academics and really appeared to make good strides in Year 1 - that definitely bought him leeway in my eyes.

Leland Wong: We're probably the wrong crowd for this question because we aren't really the raging "Fire Dykes" types. But still, it is nice to get a bit of confirmation that the system can work here as we all dreamed in addition to all the great work he's done to ensure the program emphasizes academic, character, and Cal history. 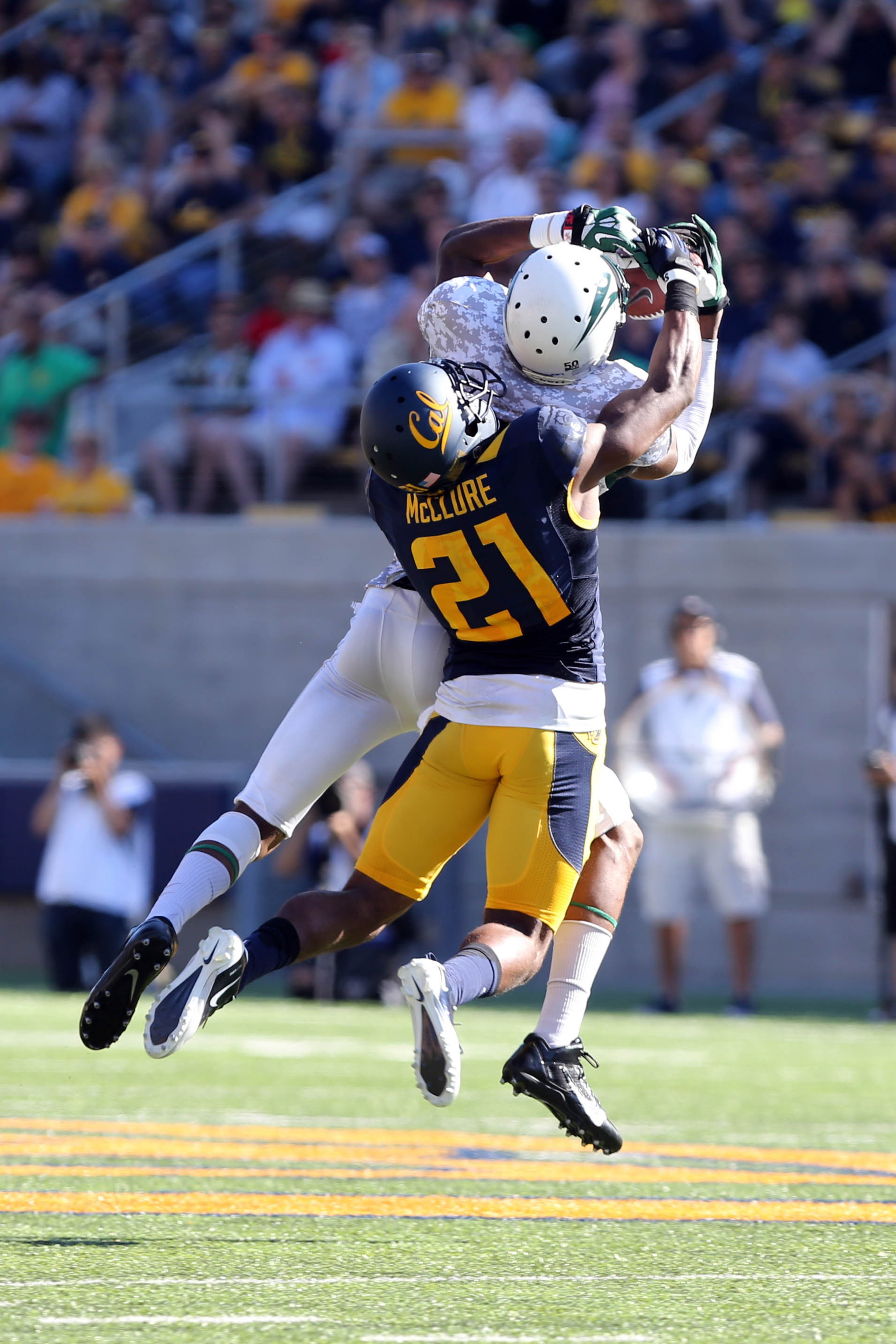 CougCenter: The defense is still awful. Why?

Nick Kranz: Mostly lack of depth, with a side portion of iffy talent. Cal got enough guys back that the first string is OK. But in this modern Pac-12, when every coach can run 100 plays if he wants to and every team is willing to throw the ball infinity times, the starters are going to wear down. They did great for 3 quarters in Arizona before wilting in the 4th rather spectacularly. An injury to starting safety Stefan McClure was particularly damaging in that regard.

Lack of talent is probably most damaging on the line, where they lost two interior starters who were the only decent players on last year's defense. They've been shuffling guys in and out in an attempt to find a pass rush and see what works best, and I don't think they have a solution yet.

boomtho: The defense is bad because one year of decent recruiting can't cure a total lack of depth. We've got good enough players starting at most positions, but we're ridiculously thin at DL and in the secondary. We also haven't been able to generate any kind of pass rush, and our corners aren't good enough to survive on an island.

Leland Wong: The jury's still out as we've played 2.75 games of mostly good defense and 1.25 games of mostly terrible defense. The biggest cause for out defensive struggles seems to be due to our lack of depth due to some recruiting misses the past few years. We threw away the fourth quarter of the Arizona game because our players were exhausted from playing to many snaps in that oppressive desert heat. We struggled against Colorado because injuries to our safety let them pick us apart through the air.

CougCenter: One thing that can get Connor Halliday off his game is a strong pass rush. Do the Bears have the ability to really get after him?

Nick Kranz: See above, and probably not. I'm not going to say that Cal NEVER gets pressure - they flushed Sefo Liufau from the pocket multiple times and forced a few throw-aways. But they never sacked him except on what looked to be a designed run, and they never got the kind of pressure that can force a throwing error.

boomtho: Probably not. We've tried a lot of things this year (rushing 3 and dropping many to get 'coverage sacks', bringing extra LB's, even corner and safety blitzes) but nothing has worked. Halliday should have lots of time to sit back in the pocket.

Leland Wong: Unfortunately, probably not. We've got one guy who has the potential to be a superb pass rusher in DE Brennan Scarlett, but if the Cougar OL just double teams him, then we're too undersized and inexperienced at the other spots on the line for them to reliably take advantage.

CougCenter: There are really two strategies for defending the Air Raid: Rush three and sit back, or rush five and try to pressure Halliday. Which do you think the Bears will lean on more often?

Nick Kranz: Probably the former, with the occasional sprinkling of the latter. Rushing five is a really bad idea if they aren't going to get to the quarterback anyway, and that's probably more the reality for Cal right now. That said, Cal runs a 4-3 and I don't recall seeing a ton of 3 linemen fronts, so I would expect mostly 4 man rushes. They tried both against Colorado and neither really worked, so . . . at least putting 8 men in coverage makes the offense dink and dunk their way down the field? I guess?

boomtho: Do I have to choose or can I just curl up in the fetal position? The likely answer is the former, despite how bad our zone coverage has been... but I can't see Kaufman bringing extra bodies consistently given how good Wazzu's playmakers are in space. Kaufman seems OK to keep the offense in front of him, which led to death by a thousand short passes against CU.

Leland Wong: Get on our knees and pray for mercy?