Traveling with the Cougs: Corvallis, Oregon

Heading to Corvallis this weekend to watch the Cougs take on the Beavers? We give you places to stay, eat and stuff to do for your trip to the Willamette Valley.

Share All sharing options for: Traveling with the Cougs: Corvallis, Oregon 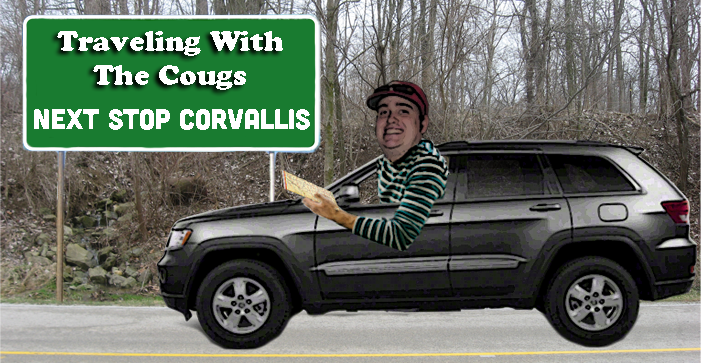 So let me get this straight: we’ve gone from Provo, Utah to Las Vegas, Nevada to Corvallis, Oregon? From little to no liquor to way too much liquor to something in between, Corvallis is snuggled into a beautiful little part of the Willamette Valley. Corvallis is like Pullman in a lot of ways: gorgeous setting, similar size and tons of students in love with the school they go to.

At the beginning of the season, this game looked to be a candidate for WSU’s fourth win of the season but after Oregon State’s win over Wisconsin (although it keeps getting less impressive) and a great road win over UCLA, OSU’s usual late season surge has started a little earlier than usual. This game could still go the way of the 2010 edition in Corvallis but that’s looking less and less likely. But at least we can try and make the trip more enjoyable. That is before you plunge into a deep, dark depression and crawl into a whiskey bottle a la "Jim" in Blazing Saddles. Yeah, it might get a little gloomy after that.

(Note Two: Yes, I know it’s incredibly close to the game so the hotels will be more expensive. Give me a break, I was busy getting married and eating myself full of those delicious sandwiches with ham and cheese the French love too much.)

Much like Provo, Corvallis is chain heavy which shouldn’t really be a surprise. Days Inns typically aren’t the best places to stay but this one has free breakfast in the morning! And a microwave in the lobby. Oh, fancy! No free internet though which is a big downside, especially in the 21st century.

This place is a little on the old side but sweet Caroline the rooms look gigantic. Rooms do feature complimentary wireless internet so that’s a big one in the plus column. They also come with a microwave so you can warm up your leftovers or blow up a potato. I’ll leave it up to you which one to go with (psssstttttt….potato).

If you don’t like gelato, you might be a communist. Check that you are a communist. But if you’re Senator Joseph McCarthy’s biggest enemy, they still serve a great selection of panini’s like their Roman Emperor with Genoa salami, prosciutto, roasted turkey and ZOMG THEY HAVE GARLIC SUN DRIED TOMATOES ON IT! SALVATION! As if this place couldn’t get any better, they took my favorite salad and put it in a sandwich. The Caprese sounds delicious with its tomatoes, mozzarella, balsamic glaze and then toss in a little pesto and this is a sandwich fit for a god.

I first discovered Hawaiian plate lunches while staying with my friend’s family in Kaneohe on Oahu and they might be the greatest lunch ever invented. Plate lunches are designed to fill you up for the rest of the day and they’re always delicious. Some of you may already be familiar with the brilliance of Loco Grindz in Pullman and this is much of the same. The regular Hawaiian style steak, marinated in a sauce most similar to teriyaki, is all you’ll ever need.

It wouldn’t be a proper traveling article if I didn’t give you a great place to get a fantastic microbrew. The Eight Man Amber Ale would be my first choice to go with the Frickin’ Chicken, a sandwich of grilled chicken topped with swiss cheese, fried pickles and a sriracha ranch aioli. Oh, and the Shrimp Po’ Boy with a house IPA based sauce. I’m always a sucker for a delicious spicy burger, so Ring of Fire would likely be my dessert choice.

Sounds simple enough right? It still is but the Willamette Valley is home to dozens of wineries, breweries and distilleries. Beer, wine and liquor is all a Coug needs and Corvallis has plenty of it. Hard Times distillery makes "Sugar Momma Vodka" which obviously has to be delicious.

A beautiful piece of forest just outside of Corvallis, four miles of trails and some open areas make it a perfect way to learn about some new ecosystem practices. Yes, you can learn while you’re on vacation too.

And there’s Corvallis, Oregon. Oregon State being a lot better than we thought they’d be makes a win a little less likely but hopefully we’ve made the trip a little easier on you.