The Monday After: Looking back at WSU's loss to Oregon State

With the benefit of a couple of days to reflect, we revisit the painful loss. WSU didn't put up much of a fight as OSU steamrolled the Cougs. This does not inspire confidence going forward.

Share All sharing options for: The Monday After: Looking back at WSU's loss to Oregon State

So, a funny thing happened on the path back to respectability ...

I've enjoyed writing these Monday After features because they give me a chance to step back from the game and reflect a little on what the result actually means. Generally, this leads me to a more optimistic response than whatever pessimistic emotion I might be feeling in the immediate wake of a loss.

Sadly, that's not what happened this time after the Cougs were slapped around by Oregon State on Saturday, 52-24.

The more I think about this game, the more discouraged I become. I haven't given up hope on this season at all -- I still think the possibility of two more wins exists. But so many awfully ugly things reared their heads on Saturday. Things, frankly, I thought this program had moved past.

I'm clearly not the only one who thought this was stuff was gone -- after the game, Mike Leach seemed visibly surprised and ticked off at what he just witnessed. I typically try to avoid entering into psychoanalyzing players and their various effort and commitment levels, but when the coach does it, and when the results so clearly point to something beyond a simple talent deficiency ...

In case you were wondering exactly where this game changed: pic.twitter.com/hcFo7nTW1D

... well, it's hard not to get a little discouraged.

I wrote in the recap that improvement is rarely linear, and I still believe that. You don't just magically turn a corner and everything is great forever; rebuilds are full of fits and starts, and this was a full on breakdown by the side of the road.

I remain hopeful that the return of the "basset hound faces" is nothing more than a temporary regression into a habit that was ingrained into many of these players over multiple years. These guys have come back admirably from poor results a couple of times this year, and even though Oregon doesn't provide the same kind of soft landing as Cal and (Lane Kiffen) USC, I will be pretty surprised if they don't come out spirited against the Ducks.

But before Saturday, I would have been absolutely sure that they would come out and hit Oregon in the mouth, even if the ultimate outcome is almost certainly inevitable. Now, I have my doubts.

I hate even typing this, since -- as Kyle Sherwood likes to say -- $2.5 million a year is supposed to buy you more than moral victories. But since it ended so poorly ... I guess I liked the first 40 minutes of the game? The ending has obscured the fact that WSU held a 24-17 lead after scoring touchdowns on the first two drives of the second half, looking like Oregon State's equal in every way.

So, I guess we liked the fact that there no longer appears to be a sizeable talent gap between Oregon State and WSU. Yay?

One of the things that concerns me most after Saturday is that I think OSU exposed WSU's inherent deficiencies a bit -- deficiencies I didn't really give a ton of credence to before. I'm not going to go real deep into either of these things here, because I'm planning on talking about them both in greater detail in their own posts, but here's a preview.

First: Remember when Auburn repeatedly got to the edges for big plays in the opener? Remember how we all were worried every team was going to bust big plays all year? Oregon State used horizontal stress to attack the WSU defense in much the same way, forcing the linebackers to move side to side. Are they capable of better, or are they just not fast enough?

Second: Connor Halliday's interceptions obviously are a huge problem. But I'm actually a little more concerned about the fact that he has a low yards per attempt against everyone not named SUU, Idaho and Cal -- just 5.3. For context, if that was his mark for the whole season, it would be outside the top 100 in FBS. The lack of explosive plays is a problem. 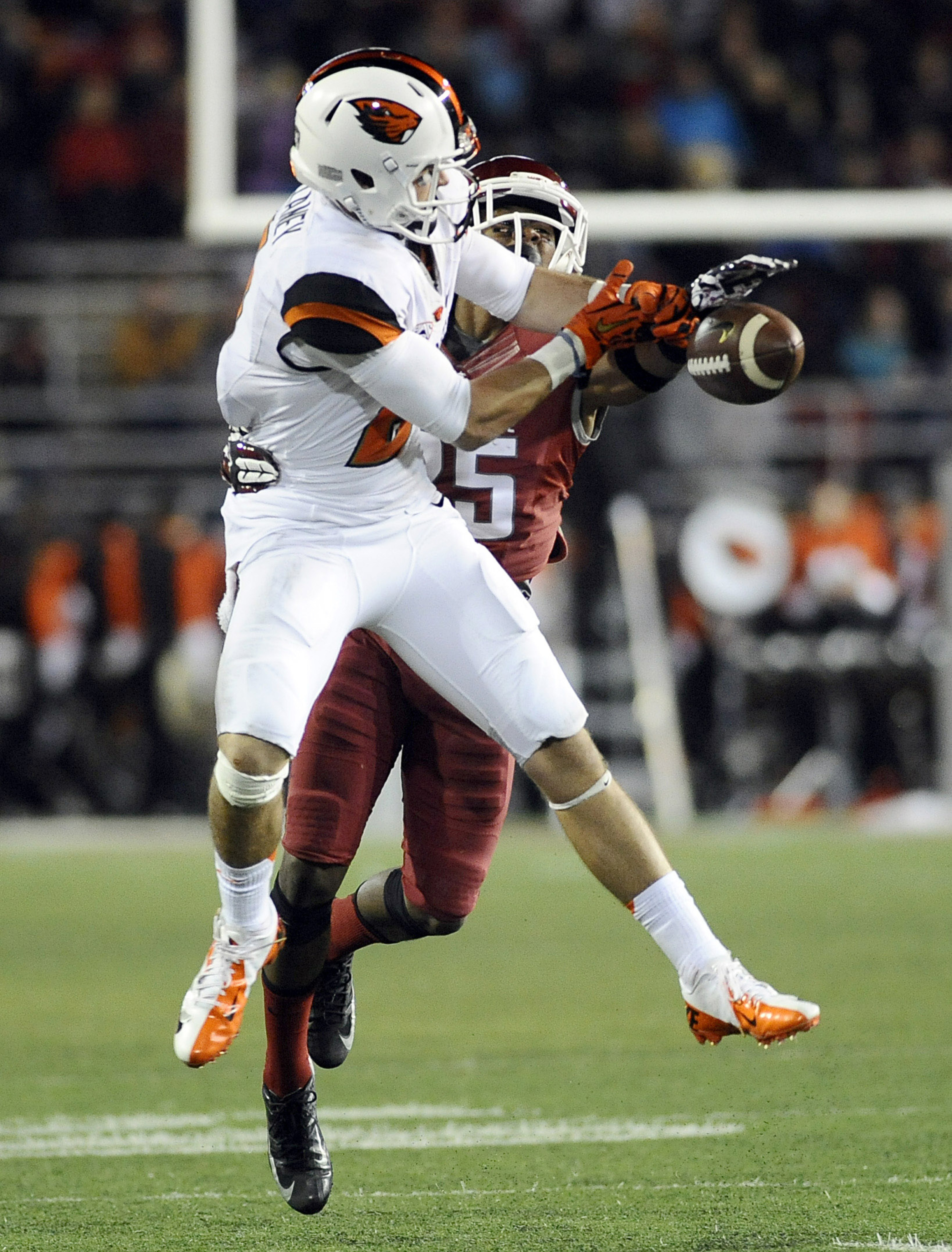 Daquawn Brown could be special.

How about freshman cornerback Daquawn Brown! It's plain to see that he's the most talented cover corner on the team, and with each passing week, his understanding of the game moves another step closer to the raw ability that is so tantalizing.

More and more, he's putting himself in position to make plays -- even if he often doesn't end up finishing the play. He got his fingers on a couple of balls that ended up being completions in the first half, and had chances at a couple of interceptions.

The next step, of course, is to finish the play when he's in position. But finally having a young corner who is matching up favorably on a physical level with opposing receivers is such a wonderful feeling, even if he's not yet fully matured. I don't want to burden the young man with expectations, but I think it's fair to say he has the potential to be our first pretty good corner since ... Tyron Brackenridge in 2006? Man, it's been a long time since we've had one. Yeesh.

Buck linebackers Kache Palacio and Destiny Vaeao had zero sacks, zero tackles for loss and zero quarterback hurries combined. Palacio got sort of close to Sean Mannion a couple of times, but the QB generally was far too comfortable in the pocket -- especially in the second half as the game was getting out of control.

I know OSU got some linemen back from injury for the game, but players at Buck simply must be more dynamic than this.

I don't really have much else to add. Gulp.

Since I didn't do a stats post on Sunday, here's the box score from the game.