The Washington State defense will have a tough task facing one of the most explosive offenses in the country on Saturday.

Share All sharing options for: WSU vs. Oregon Football Preview: De'Anthony Thomas and the Ducks offense

The Oregon Ducks make a trip 284 miles up I-5 to face the Washington State Cougars on Saturday at 7:30 p.m. on ESPN2, and they bring a potent offensive attack to the Emerald City.

Head coach Chip Kelly is the king of not giving any f@!*s. It's not uncommon to see Oregon go for it on 4th down deep in their own territory, often without hesitation. The Ducks also go for two if the defense falls asleep, as WSU has found out each of the last two years. Kelly is up there with Mike Leach as one of the more hilarious interviews before and after games, often making jokes and getting sarcastic with reporters.

Oregon's spread attack is all about speed. Not just fast players, but a quickened pace as well. Oregon routinely has long touchdown drives under two minutes, and many under sixty seconds. Before the play is even over, players are rushing forward in preparation to set up the next play. Oregon's offense is basically college football's version of the Phoenix Suns under Mike D'Antoni.

Don't let the spread part of Oregon's offense fool you; this is a running team. They don't look like the traditional turn and hand to the feature back sort of offense, but they pound away at a defense all game long. The Ducks have run the ball on 60 percent of their plays so far this season, 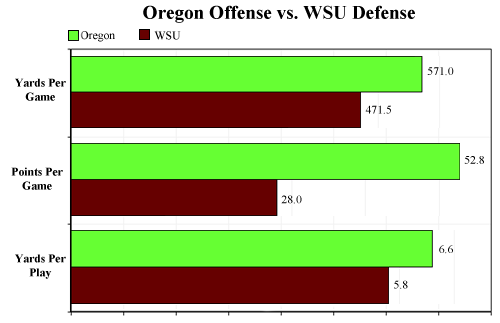 The threat of that running game allows the Ducks passing game to consistently work the ball to running backs, tight ends, and wide receivers on quick routes. Oregon went with a new quarterback this season, and he has done a fine job executing Kelly's scheme.

Marcus Mariota impressed Oregon's staff with an excellent performance in spring camp, and was named the starting quarterback for 2012. So far, that decision has worked out well.

The redshirt freshman out of Honolulu, Hawaii has been efficient in 2012, completing 70 percent of his passes for 10 touchdowns and just two interceptions. Running the ball is also important in the Ducks' offense, and Mariota has carried 27 times for 125 yards to help keep defenses honest in the read option.

Kelly certainly looks to have found a long-term solution for the Ducks at quarterback. Cougar fans should get used to Mariota, because he has three more years of eligibility left after 2012. 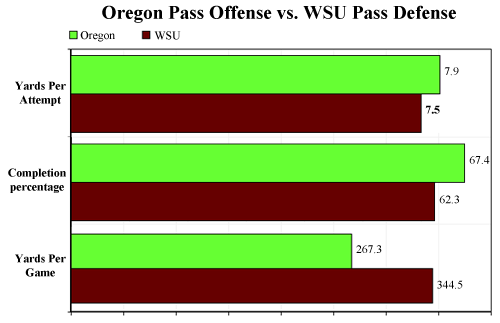 The Ducks aren't going to have any 1,000-yard receivers any time soon, and that's not for lack of talent. As mentioned before, Oregon primarily runs the ball a lot and when they do pass, there is rarely a go-to-guy. They are just looking to exploit soft spots in the defense.

Freshmen Bralon Addison and Dwayne Stanford are tied for second on the team with 11 receptions. Addison has went for 14.7 yards a catch, while Stafford is at 9.6.

There are another six guys with between five and nine receptions. There is no main guy to key on and take out. In fact, the Ducks would probably welcome that situation.

Kelly has utilized tight ends effectively in his time at Oregon, often having them split out wide like receivers. Colt Lyerla has been the primary pass-catcher at tight end this year, with eight grabs for 107 yards and two touchdowns.

The Ducks have a good mix of size and speed in this group, and they will certainly be a difficult cover for any secondary and linebacking unit. No one can take a play off, because the ball could be headed anywhere on any given play. 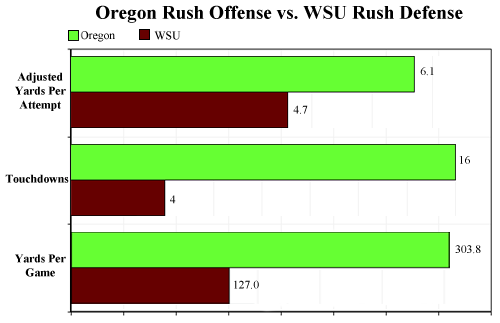 The Ducks seem to have no shortage of talented running backs, and they have a lethal combination in Kenjon Barner and De'Anthony Thomas.

Barner wouldn't typically be classified as a power back, but he is certainly the workhorse in the Oregon offense. He gets the tough carries in short yardage, and leads the team with 76 attempts for 410 yards and six touchdowns. He has great field vision, and makes quick cuts. If he finds a seam, he has the speed to breakaway from the defense.

The senior back will also come out of the backfield to catch a few passes a game. He has nine catches for 78 yards on the year.

The other part of Oregon's two-headed attack is sophomore De'Anthony Thomas. DAT's numbers on the season can only be described as unreal. He has carried the ball just 25 times for 276 yards and 4 touchdowns. He also leads the team in receptions with 13, and those have gone for 165 yards and three touchdowns.

Thomas is also a threat in the return game, as he has returned eight punts for 131 yards on the season.

Freshman Byron Marshall has also seen his fair share of carries this year, as he often gets the ball in mop-up duty. He has rushed 40 times for 199 yards and two touchdowns.

Oregon's arsenal of running backs always seems to be stocked full of dangerous weapons for Kelly to use. Who wouldn't want to go to Oregon when the third-string running back already has 40 carries through four games? That's more than Washington State's leading rusher, Carl Winston.

All of Oregon's starting offensive linemen weigh between 292 and 305, so you won't get the extra-large guys you usually see out of a typical running attack. These guys have to be quick, and they have to be in good shape to be able to run up and down the field to keep pace with Oregon's attack.

Hroniss Grasu, younger brother of former WSU kicker Nico Grasu, is the starter at center for the second-straight season. He was excellent as a freshman and made his way onto the Rimington Award watch list in 2012.

Tackle Tyler Johnstone and guard Ryan Clanton make up the left side of the line. Johnstone is a redshirt freshman, while Clanton is a JC transfer who came to the Ducks in 2010. This is the first year in the starting lineup for Clanton.

The right side features redshirt sophomore tackle Jake Fisher and redshirt senior guard Nick Cody. Fisher was actually Cody's backup a season ago, appearing in all 13 games. Cody has appeared in 37 games as a Duck, with 17 starts.

With a rushing average of at 6.1 yards per carry and allowing sacks on just five of 140 dropbacks, this group is definitely solid, even with three new starters. It helps that backup lineman consistently get playing time, so some of the upperclassmen who haven't necessarily started before are still experienced.

The Oregon offense lost their starting quarterback, their top running back, two of their top three receivers, and three starters on the offensive line and they still don't look like they've missed a beat. The Ducks are contenders for their fourth straight BCS bowl berth and Pac-12 title.

Stopping the the Ducks offense will be a tall task for the Washington State defense. The past few years, the Cougars have maintained contact with Oregon by bleeding the clock on their side of the ball. The Cougars best defense here is going to be keeping the ball away from the Ducks.

Mike Leach's Air Raid is set up to move down the field in small chunks, so if ran well, WSU could do that.