The Oregon Ducks travel to Seattle to face the Washington State Cougars, Saturday at 7:30 PT on ESPN2. The Ducks bring with them a talented defense that just shut down one of the conference's top offenses.

Share All sharing options for: WSU vs. Oregon Football Preview: Dion Jordan and the Ducks defense

The Ducks are known for their offense under Chip Kelly. An offense that is fast and puts up tons of points. The Oregon defense often gets written off because the number of points they allow, similar to the Oklahoma State defense a season ago.

Well, even someone who values points per game as the best measure of a defense had to be impressed with Oregon's dominating performance over Arizona last Saturday. The 49-0 beatdown was the Ducks' first conference shutout since 2003. The Wildcats were held to just 4.0 yards per play, well below their season average coming into the game of 6.5. The shutout was preserved by several turnovers, as Arizona gave the ball away five times, but the way Oregon limited their explosiveness was impressive.

On Thursdays we are fortunate enough to have Bill Connelly's S&P numbers to look at for evaluation, and those are very kind to the Ducks. Oregon is currently ranked second in defensive S&P, a measure that combines how often a defense limits the opposing team from having a successful play and how well the defense limits explosiveness. S&P only factors in plays when the game is in the balance, so once a game is a blowout, those plays are no longer factored in, and of course, everything is opponent-adjusted.

The terms of success in college football: 50 percent of necessary yardage on first down, 70 percent on second down, and 100 percent on third and fourth down.

That means the Ducks are putting their opponents in difficult situations quite often. The playbook for teams shrink when they are faced with second or third and long. So Oregon is putting teams in passing downs, a doing well when they get there. The Ducks are ninth in the country in performance on passing downs.

So how does the WSU offense compare? The Cougars are successful on just 38 percent of their plays, which is 105th in FBS. On passing downs, they have been 74th most effective in the country.

For more traditional stats, check out this infograph: 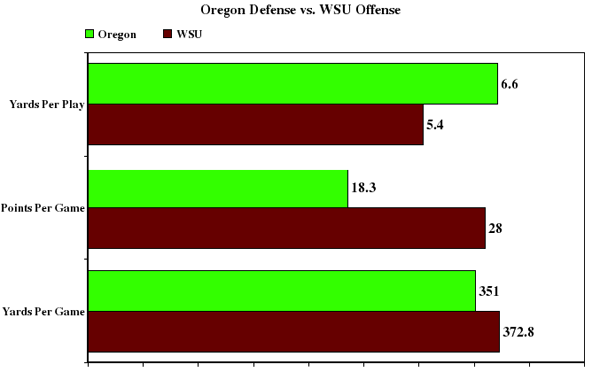 Any way you slice it, this is going to be a tough game offensively for the Cougs. Oregon's defense is fast, it is opportunistic, and it is good in every facet of the game. WSU has struggled to get going in it's first four games with Mike Leach's Air Raid, and with Connor Halliday's propensity to ignore the shorter routes and go long down the field, it could be a long day with lots of giveaways for Wazzu.

On to the positional previews 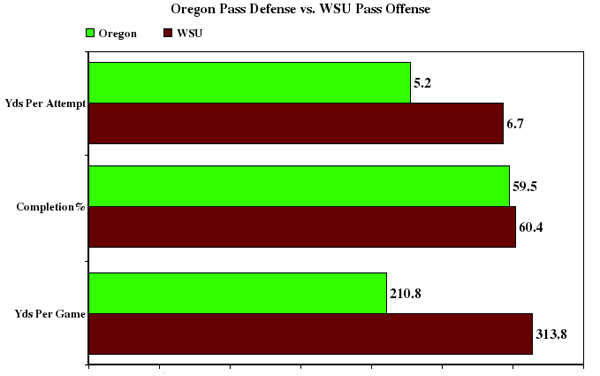 As the graph above shows, Oregon has been pretty solid in defending the pass, allowing just 5.2 yards per pass play. Smart football fans know that the secondary isn't the only factor in good pass defense, but it certainly is a key part.

The Ducks have used the same starting four in the secondary since All-American Safety John Boyett was lost to season-ending knee surgery (actually on both knees) after the opener against Arkansas State.

Terrance Mitchell and Ifo Ekpre-Olomu man the corner spots. Mitchell started 12 games a season ago, and has eight tackles with three pass breakups so far this season. Ekpre-Olomu has been a playmaker, recording 14 tackles, five pass breakups, two forced fumbles, and two interceptions, one of which was for at touchdown, through just four games.

The Ducks also rotate in more defensive backs who get playing time. WSU fans may remember Erick Dargan, who Paul Wulff attempted to lure to WSU by signing Tracy Clark and Robert Jiles, two of his high school teammates. Dargan chose Oregon. Jiles never made it to campus, and Clark has appeared in just one game this season after playing on special teams in 2011. Recruiting!

Dargan is second among defensive backs with 17 tackles, five of which have been for loss, and two pass breakups.

Troy Hill will likely appear as well. He started six games in 2011, and has posted eight tackles, an interception, and a tackle for loss.

Oregon's secondary is good, especially at the corner position, and they will make it tough on WSU receivers to create space. 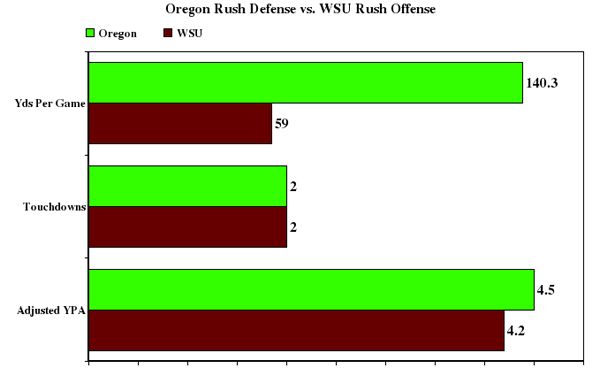 The Ducks have an experienced linebacking group with two seniors and a junior. Michael Clay is the leader in the middle and tops the team with 25 tackles. Clay also has 2.5 tackles for loss, a sack, a pass breakup, a quarterback hurry, and a forced fumble.

Kiko Alonso is a big, tall linebacker on the outside. He is second on the Ducks with 19 tackles, to go with two interceptions, one of which was for a touchdown, 3.5 tackles for loss, two hurries, and a pass breakup.

Boseko Lumbo plays opposite Alonso, and has 7 tackles, two for loss, a sack, and three pass breakups.

Oregon typically uses their linebackers to blitz and bring pressure, but it might not be needed on Saturday. WSU's opponents have found success in dropping seven and eight men into coverage, and forcing Halliday to go to his checkdowns, which he doesn't really like to do. Oregon may have the best success at this strategy, because of their strong defensive line that will give the Cougs trouble.

Bringing people out of coverage to rush Halliday may play right into his strengths, which are making quick decisions and sticking with them. 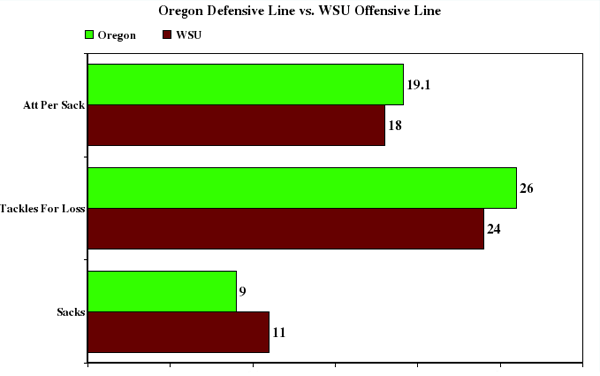 The Oregon defensive line returns four players who started games in 2011, the best of which is rush-end Dion Jordan. He is third on the team with 18 tackes, has three for loss, two of which were sacks, as well as a forced fumble and pass breakup. Jordan was All-Pac-12 a season ago.

The other starting end is Taylor Hart. He has 12 tackles on the year, with two sacks.

At the tackle spots will be Isaac Remington and Wade Keliikipi. Remington has nine tackles, three for loss, and one sack on the season. Keliikipi has six tackles and one for loss.

The Ducks' front-four will be able to get pressure against WSU's offensive line. Far lesser defensive lines have done so throughout the season, rushing just three and four defenders.

If Oregon does blitz, they do have capable corners, but WSU's receivers have shown the ability to win one-on-one jump balls this season, and Halliday does not hesitate to go after single coverage.

Will the Ducks do what all other Cougar opponents have done and drop back into coverage? Or will they continue with their attacking style, trusting their secondary to lock things down? Should be an interesting thing to keep track of on Saturday.