Yeah, the interceptions are awful. But that's not what's bothering me these days.

As he has been for much of the last 12 months, WSU quarterback Connor Halliday again is the subject of much angst thanks to Saturday's three-interceptions-in-six-throws performance that acted like a gallon of gasoline thrown on a smoldering fire in what ended up as a beatdown loss to Oregon State.

Halliday has a lot of moments of productivity, but when he goes down ... man, it is something spectacular. It's like an episode of Oprah's Favorite Things for opposing defensive backs.

I know fans really, REALLY hate the interceptions -- unlike a lot of things the quarterback does, interceptions are plain for all to see and they seem entirely preventable. And Halliday is throwing too many of them, to be sure.

However, I think the emotional obsession with the turnovers is masking a more troubling issue.

In the wake of the loss on Saturday, a reader left this comment focusing mostly on the interceptions Halliday throws against tougher competition to make the following point:

"The reality is that Halliday is out of his league. He would be a very competent QB in the Big Sky or Mountain West conferences, but in the Pac-12 where he's competing among the best in the nation, he hasn't been able to demonstrate he can cut it."

My initial thought? Any quarterback will look worse if you cherry pick stats against their toughest opponents. I mean, we already know that the overall numbers look pretty good. But because the stats he/she used to support the argument looked wrong to me (and they were, indeed, incorrect), I went ahead and dug them up and ran them myself. This was the result.

To be honest, I mostly was interested in simply getting accurate numbers out there -- I didn't anticipate finding anything interesting. I knew the interception numbers would look ugly. But despite this still being a little bit of statistical cherry picking, that low yards per attempt in the bottom row caught my eye. After all, these four performances were part of the three losses plus another game that easily could have been a loss, and also came against the four best defenses WSU has faced.

I mentioned this in the Monday After, but just to reiterate: If you're unsure how low 5.3 yards per attempt is, that would put Halliday outside the top 100 quarterbacks nationally if it was his mark on the season. And it's not like there's an outlier dragging down Halliday's average; the range is 5.1 to 5.7 in those four games.

That, folks, is a problem. Maybe not a bigger problem than the meltdown-type interceptions, but when you've got a turnover prone quarterback, you better be picking up some big plays to offset the damage. In fact, you can live with a number of turnovers in that situation. What's killing the Cougs is that Halliday is turning the ball over downfield without also getting the big plays downfield.

In its earliest iterations under Hal Mumme and Mike Leach, the Air Raid was known as a dink and dunk offense. But that changed over time to the point where in his 10 years at Texas Tech, Leach quarterbacks posted a median 7.4 yards per attempt. Ripping off big chunks of yardage became a huge part of the offense and was the reason the Red Raiders struck fear in opposing defenses.

Clearly the Cougs are not striking fear in anyone who is any good. And I think there are a few factors in play here.

1. When big plays are there to be made, they too often aren't getting made. This is the simplest and easiest one to identify. Halliday is frequently overthrowing receivers who have a step on defensive backs. He's got to make that throw. He's missing too many of them.

2. Halliday isn't really as aggressive downfield as you think. This, of course, runs directly counter to the popular Halliday-as-gunslinger narrative. The "f--- it, go deep" mentality that is synonymous with Halliday? About the only times it actually pops up now are when Halliday either A) tries to hit a receiver on a vertical route on the outside (which actually is a pretty safe throw to attempt), or B) decides to try and play hero ball during the times when the game is starting to fall apart (which, of course, is the worst time to try and be "aggressive").

Take another look at the "shot chart" Brian put together from the Cal game. Note the locations of the throws - only 11 of his 67 throws were 15+ yards from the line of scrimmage (and to the point of No. 1, he completed just three of them); beyond that, nearly all of those shots were down the sidelines -- there's this fairly conspicuous "U" shape to the attempts, where just about everything between the numbers is within 10 yards of the line of scrimmage. Here's one example: 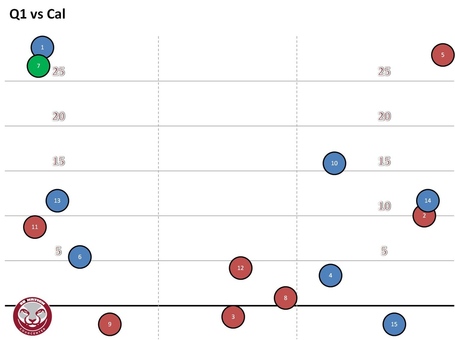 Now, we don't have that sort of data for any other games. But I ran the idea past a couple of the other authors, and this jives with their anecdotal observations: There's a good sized chunk of the field that Halliday doesn't attack really at all. Try to remember the last time he attempted a pass down the seam. And if you can think of one (I couldn't), try to think of another one. I'm certain you'll run out quickly.

Twelve months ago, we thought we wanted a plethora of checkdowns from Halliday. Even now, it's easy to convince yourself that lots of completions = effective Air Raid quarterbacking. Heck, I was guilty of it as recently as Saturday. But while completing a ton of safe throws is certainly preferable to the alternative, it's not what this offense is supposed to be. The Air Raid is supposed to be able to use every bit of a 1,500-square-yard (50ish yards wide by 30ish yards deep) box on the field to attack the defense.

There's about a third of that box that Halliday more or less ignores -- a part of the field that should yield some big plays.

The line between aggressive enough to hit some big plays and too aggressive so as to throw interceptions is a fine one, however. 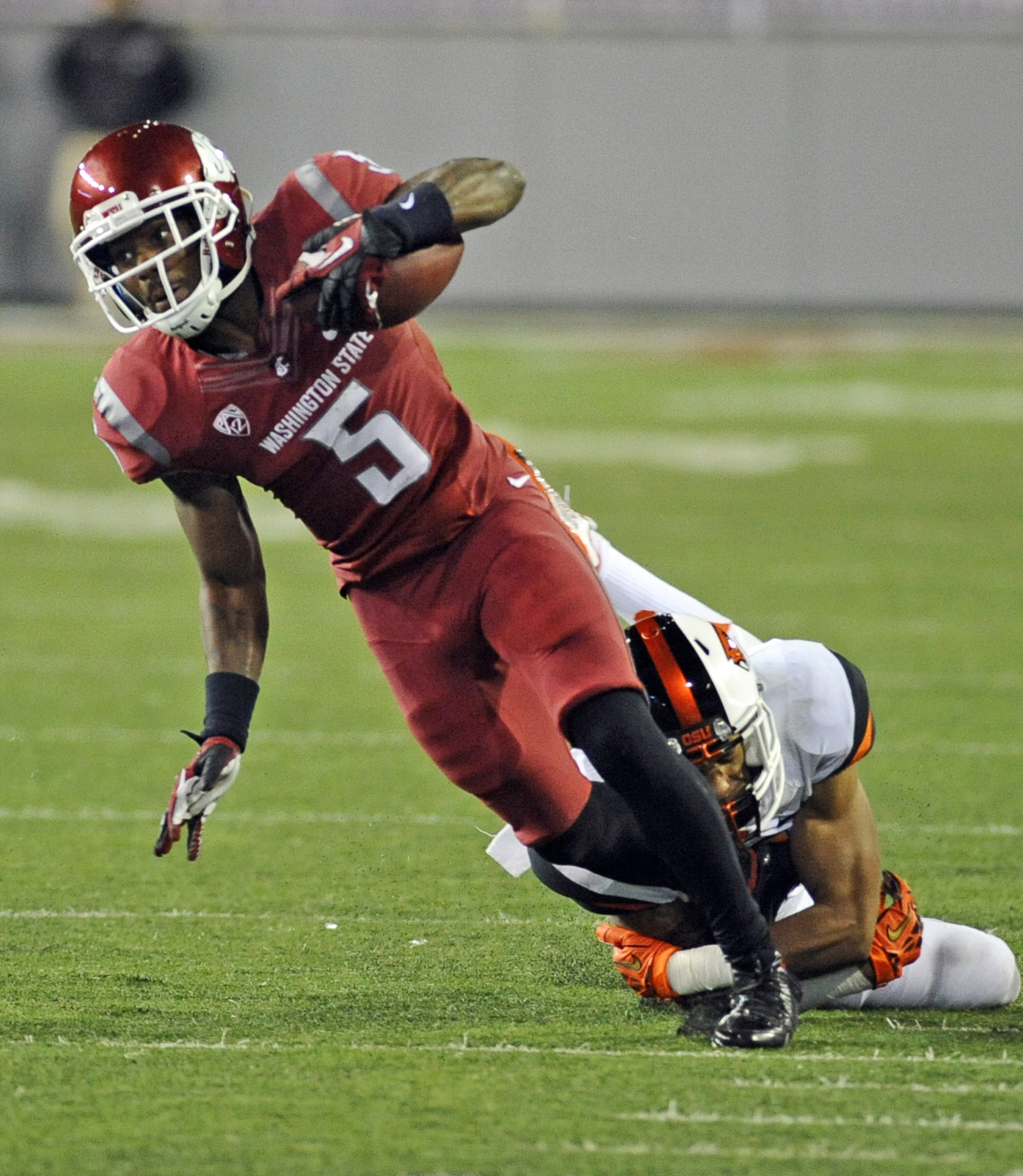 Cougar receivers such as Rickey Galvin typically don't have a lot of room to run for big plays. Who's at fault for that is debatable.

3. The yards after catch just aren't there. This one is tied to No. 2 and is a little trickier, in terms of dividing up the blame pie. Without being able to see the all-22 video the coaches and players see, it's tough to know if this is more on the receivers or the quarterback.

If you're inclined to blame it on the receivers, the argument would go something like this: They're simply not getting the kind of separation that allows them to run free after a completion.

If you're inclined to blame it on the quarterback, the argument would go something like this: Yeah, Halliday is completing a lot of passes, but he's not anticipating throwing windows -- he's not "throwing guys open," so to speak, so they can catch the ball moving into the open space. An alternate explanation? It also could be a matter of Halliday getting the ball out too quickly and not waiting long enough for plays to develop -- perhaps a consequence of having approximately 1.2 seconds of protection for the past two seasons.

Whatever it is, about the only play the Cougars run that semi-consistently gets guys running in space is the shallow cross. Again, that's a problem.

I won't presume to know what the solution is here. I do still think Halliday can improve himself to be successful at these things; the first could potentially be solved by continuing to refine mechanics, while the latter two can evolve with more experience. It's important to remember that Kliff Kingsbury posted just 5.8 yards per attempt for the entirety of Leach's first year at Texas Tech before improving to 6.6 and 7.0.

This is something that will bear watching. Because until this offense gets more dangerous down the field against non-terrible opponents, it's going to be difficult to post the kind of offensive numbers that will lead to that all-important pair of victories.

And it will make it near impossible to hang with Oregon for any length of time on Saturday.