The Monday After: Looking back at WSU's loss to Oregon

What's that you say? It's not Monday? I hope you can forgive me.

Share All sharing options for: The Monday After: Looking back at WSU's loss to Oregon

I have three boys, ranging in age from 20 months to 6 years, and I can verify that children are amazing little creatures.

Those of you with multiple children of your own will completely understand what I've been through in the last five days. If you are without offspring of your own -- or, like Sherwood, with just one and only beginning to embark on your own journey of wonder and awe -- here's a little window into boundless joy that you're missing.

Beyond inspiring such emotional extremes as unflinching love and unparalleled exasperation, one of the many incredible talents of these little cherubs is the ability to pass viruses between one another for seemingly months at a time. I have been something less than 100 percent since mid-August because of one cold or another, and it came to a head (at least, I pray to God this is the head) this week when my youngest brought the flu back with him from a relative he stayed with.

It started on Saturday as I was watching football at my desk. Atticus (my youngest) ran up to me, making the universal motion for "up" that every parent knows. Thinking to myself, "Awwwww ... so cute! He wants to watch football with me!" I propped him on my lap as he laughed and pointed at the screen, shouting, "A ball! A ball!"

What if the Pac-12 coaches were your co-workers? 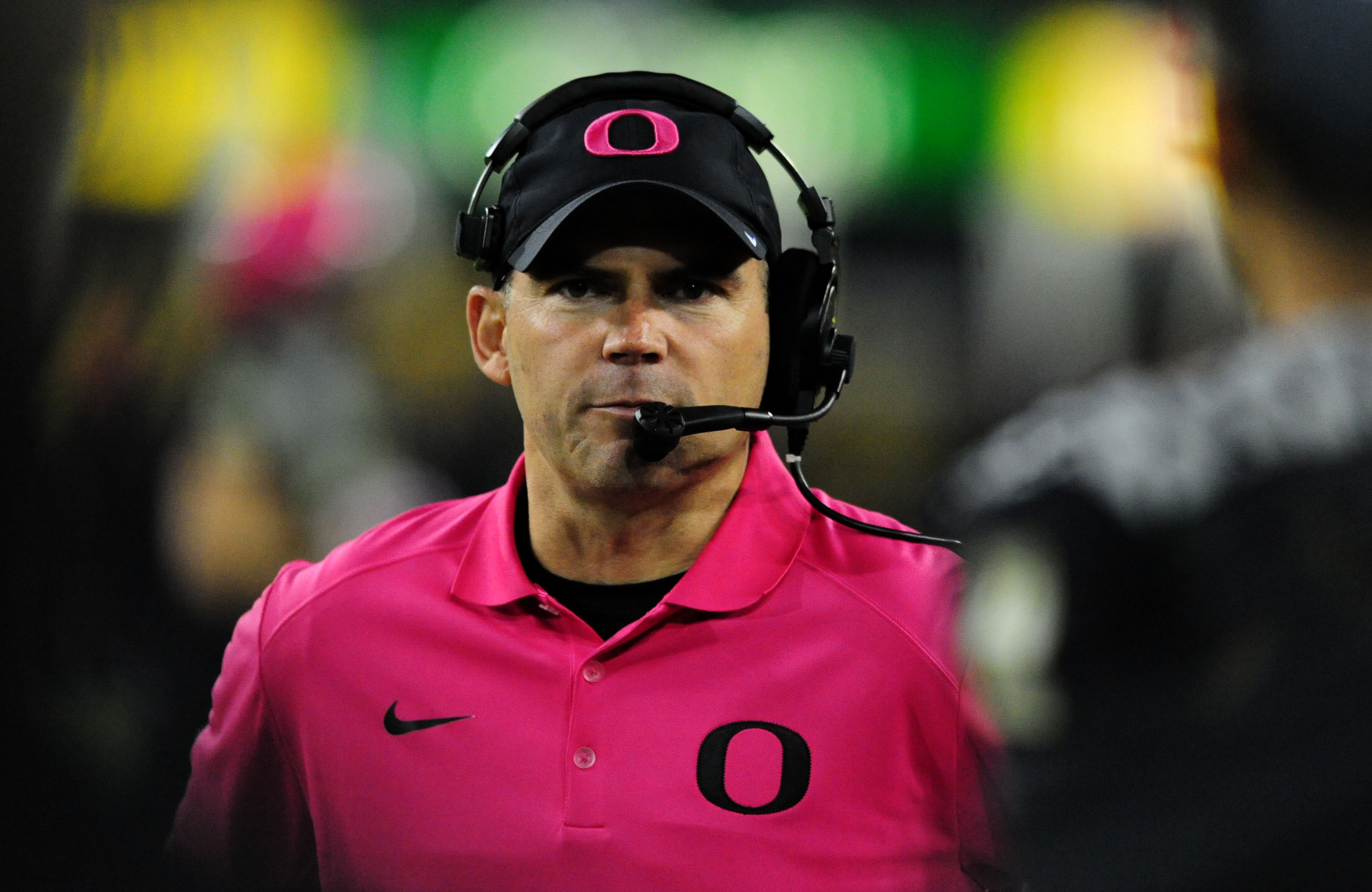 In this week's Gravitron Diaries, Kyle Sherwood imagines head football coaches as such luminaries as "the guy who wants to be the office DJ." That would be the guy pictured above.

What a proud daddy I was!

Then he started doing this ... I don't know, whimpering. A veteran parent knows there are different cries. When you have your first child, every time the kid cries it's like "OH MY GOD IS HE DYING BETTER CHECK ON HIM RIGHT THIS SECOND!!!!" As time goes by, you learn which cries to take seriously (the "hurt" cry) and which ones to ignore for a while (the "I'm being a stubborn jerk and refusing to sleep" cry). This cry was different. It was subdued, almost sort of pitiful ... I wasn't quite sure what to make of it.

Then the fireworks started.

We would go ahead and repeat this puke on dad/strip off puky clothes/take a shower/put on clean clothes process three more times that day, so it shouldn't have been a shock when, on Monday, I started feeling a little icky. The day started out fine; I got up at 5 a.m. like usual, played basketball with the staff at my school (as usual), got abused by better players (as usual). But by noon, though, I knew something wasn't right.

I'm sure you can imagine how the rest of the night turned out. There wasn't a lot of motivation on Monday to sit at a computer to write "The Monday After" in between my joyless jaunts to the bathroom. I went to school Tuesday hoping not to miss another day with my students, but no matter how hard I tried, I couldn't shake the fog in my brain. As I constantly -- and fruitlessly -- searched for the right word or phrase in my lesson, it felt like I was grasping at something just out of my reach.

So, between throwing up on myself at inopportune times and moving at a pace just slightly slower than the speed that life was requiring of me, you could say that my last few days were a lot like the WSU defense against Oregon. I rewatched the game yesterday hoping to work up some righteous indignation over the defense's performance, which was ugly by any objective measure -- 55 points, 719 total yards, 9.3 yards per play -- but I honestly couldn't.

I still firmly believe this defense is vastly improved, but I also continue to believe it has pretty extreme weaknesses, particularly when it comes to the linebackers and safeties in space. And while I'm certainly not excusing everything the defense did, even something as seemingly simple as making a tackle isn't quite that simple when it's Oregon.

Remember this touchdown run by Thomas Tyner? As it happened on Saturday, I remember screaming "MAKE A TACKLE!!!" at the TV. Then I watched it again yesterday and realized that they didn't miss the tackle because of poor fundamentals or focus; they missed the tackle because they thought they were right on him, but he hit that hole a split second faster than they thought he would, leaving them grasping at legs with their arms:

How do you blame guys for just not being fast enough? It's only going to truly be fixed through continuing to elevate the talent level on the team, and that just hasn't happened yet with only one full recruiting cycle for this staff.

The good news is that there's nobody left on the schedule who possesses these kinds of athletes. The bad news is that there are teams with athletes on par with Oregon State. We'll see if defensive coordinator Mike Breske can coach 'em up between now and Halloween.

For a half, the offense looked better than it has all season, when you consider the competition. The Cougs put up 17 offensive points in the first half, and it easily could have been 24 if not for an untimely fumble by Vince Mayle at the goal line that ended up being recovered by Oregon in the end zone.

The angst about Connor Halliday and his interception meltdowns is deserved, but this -- which I wrote at halftime -- actually did happen:

The Cougar offense got off to a rocky start, but Connor Halliday has found his stride, which he hopefully will continue as long as his arm doesn't fall off -- he's 27-of-43 for 319 yards, two touchdowns and an interception. That's good for an excellent 7.4 yards per attempt, a testament both to Halliday finding his receivers down the field and also guys running after the catch -- Gabe Marks had a long gain on a shallow cross, while Isiah Myers had a long gain on an inside screen.

For comparison, Washington's yards per attempt the previous week against the Ducks -- at home -- was just 5.7. No team had thrown for more than one touchdown against Oregon in an entire game this year, yet Halliday and his receivers had eclipsed that in the first half. Only Colorado (yeah, your guess is as good as mine) posted a higher yards per attempt for a game against the Ducks than the Cougs' 6.3.

Earlier in the week, we lamented how this had become a bit of a dink-and-dunk offense under Halliday. For a half, the Air Raid was humming along exactly as it's supposed to, as Halliday was cautiously aggressive downfield to earn a handful of medium to long gainers to offset the plethora of short gains.

It fell apart in the third quarter, but it's definitely something to build on. And for what it's worth, Halliday's arm appears to still be attached.

This might seem to run counter to my conclusion in the lead item, but the Cougs simply must do a better job of containing big plays on the edges.

Yes, some of that is simply explained away by athletic ability, but if the defense is going to play well enough to somehow get this team two wins down the stretch, WSU is going to have to figure out some way to stop getting abused by being stretched horizontally.

It was a problem against Auburn that didn't rear its head again until Oregon State. Here's to hoping there's something that can be done schematically to contain that.

Easy answer: Xavier Cooper. How often do you see a defensive lineman finish tied for second on the team in total tackles? Cooper racked up nine -- including 2.5 for losses and 1.5 sacks -- as a disruptive force for the Cougs all game.

Before the game, he had 20 tackles. On the season. Total.

And of course, there was this:

Cooper also had a pair of forced fumbles in the game. The sophomore, who now leads the team in tackles for loss, is really coming into his own.

This might seem sacrilegious to some, but I'm going with Deone Bucannon. Given how many opportunities there were for players to make tackles, that he would only come up with nine total -- six solo -- is unfortunate. He whiffed filling the hole on Oregon's first TD, that long run by Marcus Mariota, and just wasn't all over the field the way we're used to seeing.

Yes, he had the nice strip and recovery right before the end of the first half. But the defense needed more from its leader.

As you surely realize by now, the Cougs have a bye week to get healthier and get better. The final stretch of games gets underway when Arizona State comes to Pullman for a Halloween night game that will be broadcast on ESPN.

The Sun Devils also are on bye, and they have only played one true road game all year -- a trip to Palo Alto where the Stanford Cardinal made them look not all that good. They're coming off a flat whipping of Washington, though, where they looked vastly superior to the Huskies.

However, it was supposed to be a cake walk for ASU back in 2011, and we all know what happened there in another late-season night game.