WSU was repeatedly called out by a commentator, not the refs, for running illegal plays against Oregon. Breaking them down tells a different story.

Washington State came out last Saturday night and gave the No. 2 ranked Oregon Ducks all they could handle in front of a raucous Martin Stadium crowd that hadn't shown itself against not-UW in nearly a decade. Oregon fans said it was loud and intimidating -- high praise from the people that call Autzen Stadium home.

It used to be that going to a game, being in that environment, meant missing out on some things that only a television broadcast can provide.  Now, with jumbotrons, replays, and cell phones in stadiums with wireless coverage -- the internet -- that gap in what a television provides has narrowed. About the only thing the home viewer has that the stadium fan doesn't is a broadcast team framing storylines.

There are essentially three ways defenses have tried to defend the Cougs when they've deployed the Air Raid. WSU saw the first, a soft zone, a lot in Leach's first year. The quarterbacks and receivers hadn't yet quite figured out how the offense worked and couldn't exploit it. When a defense is comfortable in its coverage, it can unleash some fire zone blitzes and line stunts up front, which hit home all too often. The second strategy involved blitzing like crazy. Other teams worked a whole defensive gameplan around getting after the quarterback (Utah is one of those teams); rather than trying to defend receivers in space, they'd just try to keep those pass attempts from even happening.

WSU took the Ducks to the wire; that they were able to do so tells us a lot about how far this program has come.

Moral victories don't make the number in the win column higher, but the Cougs looked as spectacular as they have all year against Oregon. We break it down.

Let's bring our attention to the last one: Straight lockdown man coverage.

Oregon came out in the defense they showed earlier in the season (and last year), primarily running man-coverage underneath with two high safeties and three down lineman, a scheme typically called "two-man." When the Cougs changed personnel to two RBs (20), or brought in two tackles (12)*, Oregon would adjust and bring a DB into the box but the idea was the same: man coverage underneath and a free safety.

*Personnel names list the number of running backs first, then the number of tight ends. So even though WSU used offensive tackles, they were playing the tight end position and get that nomenclature.

Also, a side note - color commentator Rod Gilmore trumpeted several times that WSU's 12 personnel sets (he called "7-man") would create man-on-man coverage outside.  While this isn't wrong, it's important to note Oregon spent most of the game in man coverage anyway. When Oregon wasn't in man, they played the zone coverage we detailed in the above link.

WSU has really struggled against press-man in the past.  They had difficulties getting separation off a jam; this is where you hear Coach Leach talk about receivers needing "violent hands" and breaking routes against a single defender in their hip pocket. It seemed like a real point of emphasis through the off-season.

Aside from learning to break jams at the line, certain route combinations are notorious man-beaters. Basically, if receivers cross paths, you're forcing the defenders to either switch or chase their man through an intersection.  This is called a "rub."  In football, like NASCAR, rubbin' is racin'. Everybody runs them against man coverage, including Oregon, when they needed to beat Michigan State.  At that intersection, the ref needs to make a snap decision whether the contact was intentional and enough to warrant offensive pass interference.

It is most definitely not an illegal "pick play," as Rod Gilmore, ESPN's color analyst during the game, apparently led everyone watching on TV to believe. Just because there's contact doesn't mean it was intentional.

Here's how the play unfolded.

WSU had Drew Loftus outside at Z (south Kennewick represent), who's parlayed a great spring and a happy-healthy absence of Kristoff Williams and redshirt of Gabe Marks into some decent playing time this season. Jeff Nusser man-crush River Cracraft was inside him at Y. Rickey Galvin at H motions through the backfield pre-snap. 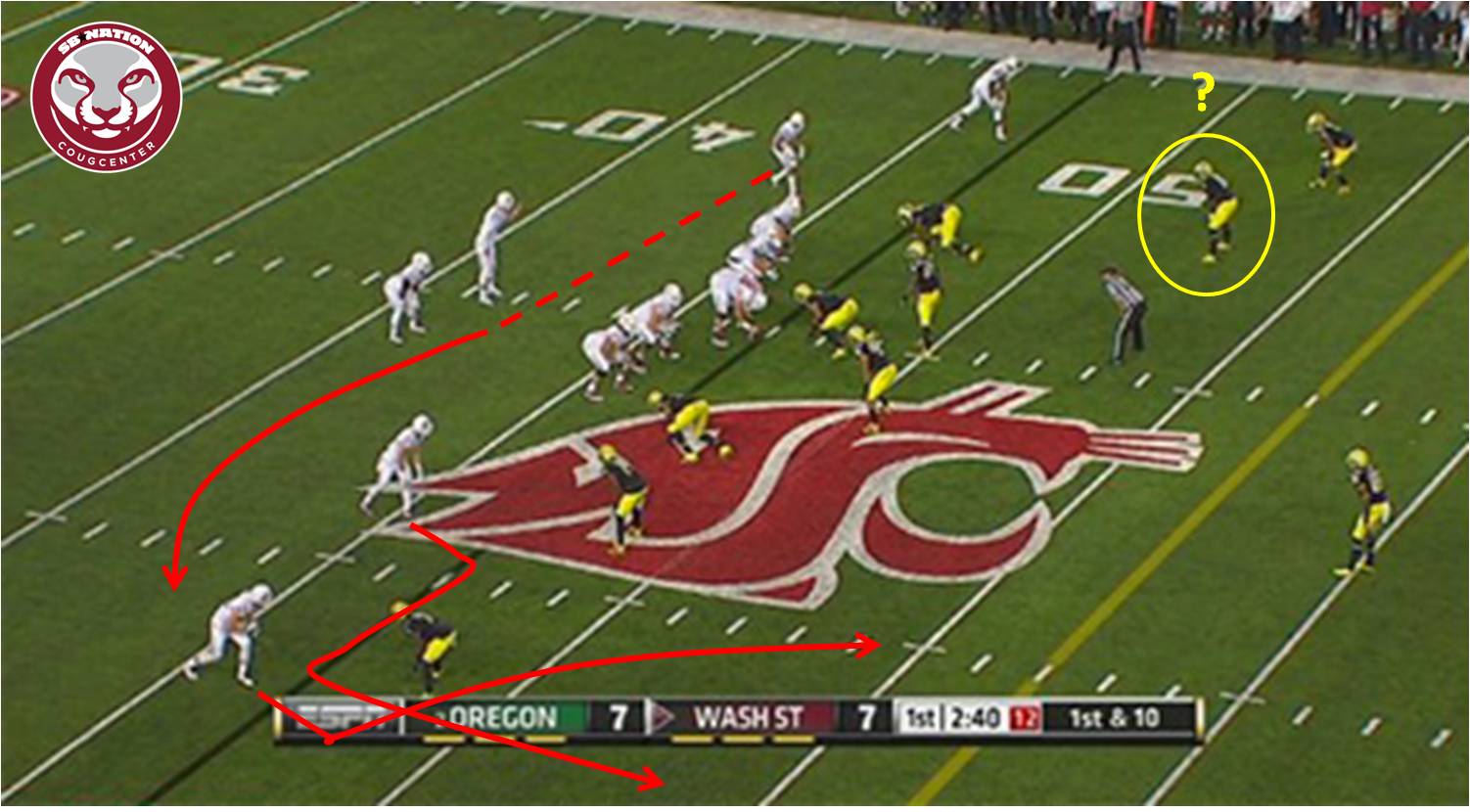 This play works because Oregon's defense had some major problems -- or, at the very least, what they did was questionable on a fundamental basis. They show man underneath, and have two high safeties (one off screen to the boundary side).  Absolutely no one adjusts for Galvin's motion. It's not until the pass is already thrown that you see the boundary safety appear on-screen to crash toward Galvin's swing route.  Even if they cover the wheel perfectly, which they don't, Galvin was uncovered with 15 yards of green in front of him.

The field safety meanders forward without even looking toward the outside routes. I have no idea why. Despite having eyes in the backfield for the whole play, he doesn't even try to cover Galvin. Whatever he was trying to accomplish, it didn't do very much of anything productive against this play.

Loftus' route is actually targeted just as much as the wheel, it's not designed to be wasted on a pick -- that intersection is meant to be a little rub, and nothing more, to open either the wheel or the post, whichever emerges from the chaos. The Duck defense didn't do itself any favors by running directly into it.

Even this isn't a pick route. 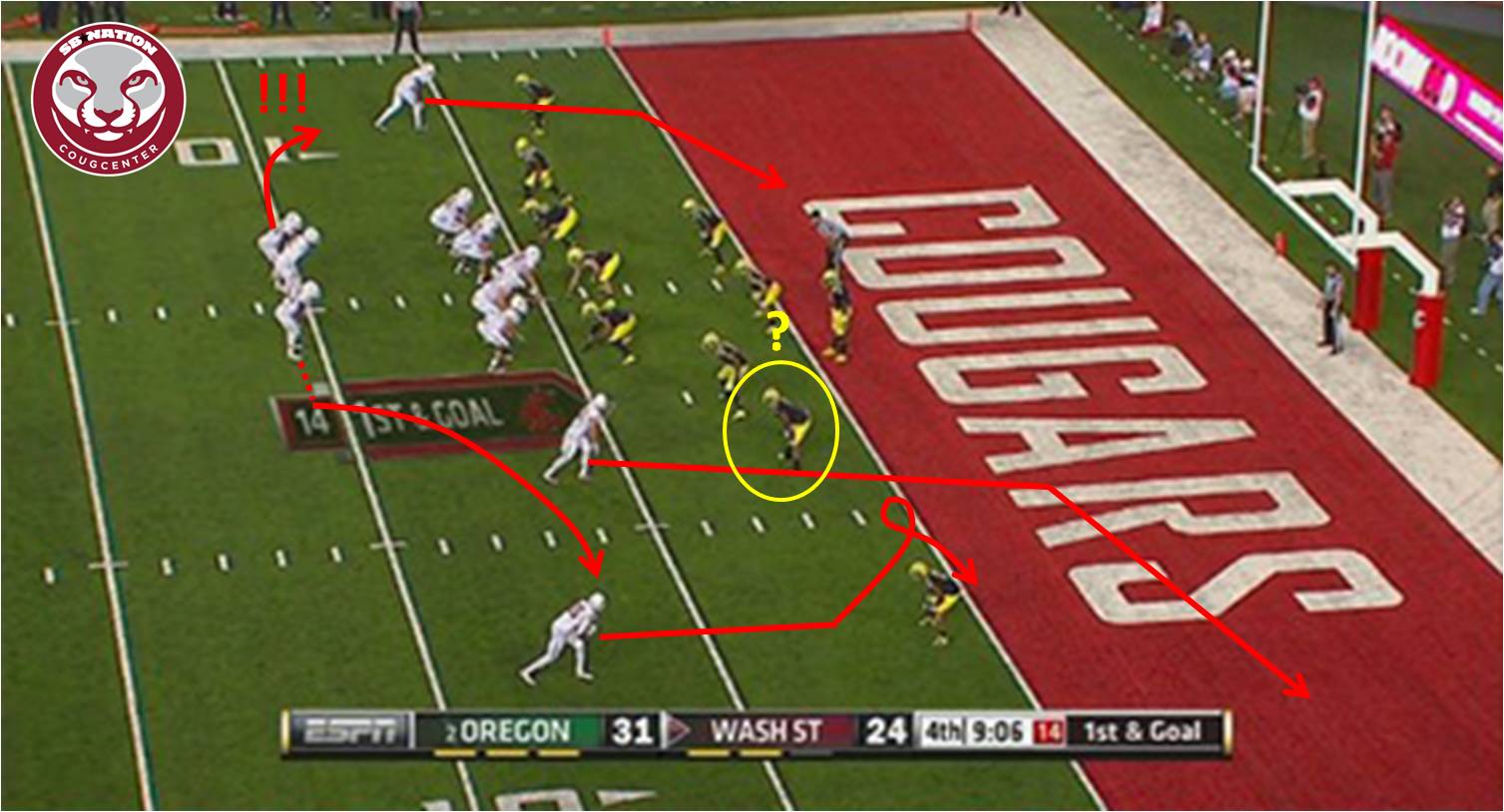 Oregon plays some sort of zone defense at the goal line, taking coverage drops before simply letting Cracraft run behind them untouched.  The corner jumps Isiah Myers' slant inside at the same moment the inside DB decides maybe not covering Cracraft was a bad idea and back-peddles directly into the both of them. No. 4 for Oregon hits his own corner after bumping into Myers before falling down in the endzone.

Connor Halliday and his receiving corps were able to exploit Oregon, and none of it was because what they were doing was illegal, as was heavily implied ad nauseam during the broadcast. WSU found success because Oregon's secondary was exposed for what it is -- seriously, go back and re-read this and then say what WSU did was any kind of surprise -- and the lack of a pass rush allowed Halliday to get in rhythm.

As bad as the Cougs' record is right now, when Halliday gets in rhythm with this offense, they're gonna move the ball on just about anybody. Don't let color commentators who expected to fill garbage time of a blowout with playoff and Heisman talk frame your opinions.

This offense isn't a cheap trick that relies on illegal plays to beat people. It was a serious match-up problem for the best team in the conference.

WSU vs. Oregon: Cougs can't close the deal against No. 2 Ducks