WSU vs. Stanford football: Baxter the Pekapoo's beer of the game

The coolest pekapoo on the internet is here with his craft beer selection of the week, and he may have not hated the choice for Stanford.

Share All sharing options for: WSU vs. Stanford football: Baxter the Pekapoo's beer of the game

Baxter had lots of excitement last night, as the typical college town happenings on the sidewalk in front of our house were taken up a notch. He was called to attention sometime around 1:30 a.m. when a fight broke out in his front yard. The fight knocked over a trash can, which is his favorite place to pee. Shortly thereafter, police showed up and came to the door to ask Baxter and I some questions. Bax was pretty excited to meet the police officers, and they were happy to see him.

So that late night led to a late morning for Bax, as he is still recovering and watching some college football this afternoon. 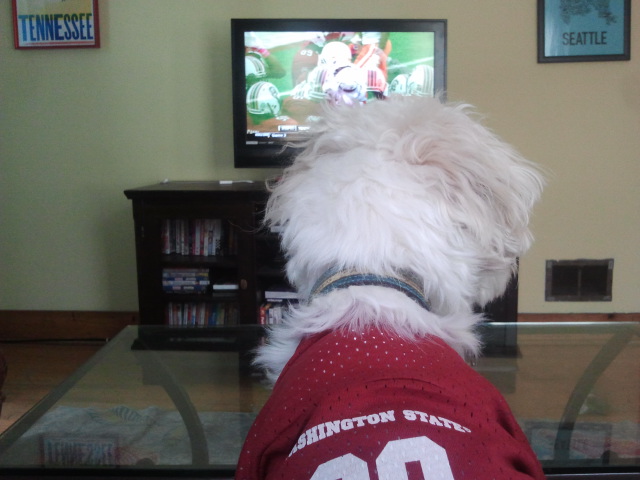 Switchback has some commendable brewing practices, as they keep things as natural and traditional as possible. They use nothing but the basic beer ingredients of hops, malt, yeast, and water like most craft breweries do, but they do just a little more to keep their beer "natural."

Their ale is unfiltered, meaning they leave whatever yeast and what not that is left over from the brewing process in the beer. That is not something that is completely unique, as hefeweizens are always unfiltered and many breweries will keep their entires lines unfiltered.

What is most unique about Switchback Ale is the natural carbonation. When yeast eats the sugars in malt, it produces alcohol and carbonation. Most brewers still take the step to force carbonate their beers after this process, but Switchback does not. The result is a lightly carbonated beer.

Now what sort of style is Switchback Ale? Well, it doesn't exactly fit into any particular type, but it is probably closest to an English Pale Ale.

Craig's Review: The beer pours reddish-amber and almost looks like an alt ale. It has a sweet, tree fruit-type aroma that comes from the balance of malt and hops. Some of the sweetness carries over to the taste, but there is still a noticeable hop presence that provides a clean finish. Leaving the beer unfiltered gives it a little extra body, and that is welcome.

The light carbonation is favorable. I am the type of person that prefers my beer a little flat, and that is why I buy cask beers whenever possible. Switchback doesn't have that biting carbonation that some beers have, and that makes it easy to drink.

Overall, this is quite different from some of the typical malt and hop bomb beers Baxter usually selects, but sometimes it is nice to have an easy-drinking beer that still has plenty of flavor to satisfy.

Baxter's review: Once again, Craig forced the beer up to my nose and my initial reaction was to pull away. He tricked me into licking the Switchback out of his hand, and this time I was not disgusted. Craig brought more for me, and I licked it again. I actually enjoyed this beer and would welcome more of it. Knowing Craig, he will just pick an icky high-alcohol, hop-dominant beer again (don't listen to him, I don't pick out the beers. I'm not even allowed in the stores). Silly.

The ounce or so of beer I consumed allowed me to be a little loose and conversational when the lady police officer stopped by the house after those guys knocked over my peeing can. She was trying to act all serious, but she couldn't keep from smiling at me. I still got it.

So that is the beer that Baxter and I will both be enjoying as the Cougs take on Stanford. What will you be having?