The Cougars will face a third-straight run-heavy offense on Saturday, but they won't be able to focus on the running back against UCLA.

Share All sharing options for: UCLA vs. WSU football preview: Johnathan Franklin and the Bruins offense

The Washington State Cougars host the UCLA Bruins in chilly Pullman, Wash. on Saturday, and head coach Jim Mora's squad brings a talented offense with a dominant ground game. The match-up will be broadcast at 7:30 p.m. PT on ESPN2.

UCLA fans can probably thank Rick Neuheisel for redshirting quarterback Brett Hundley last season while throwing the Kevin Prince/Richard Brehaut collective out for slaughter in 2011. Neuheisel lost his job as the Bruins became the only team to ever finish with a 6-8 record (although Rick seems to be enjoying himself in his new gig).

Hundley has exceeded expectations in his redshirt freshman year. He has been an immediate upgrade in the passing game and provides a bruising run threat to keep defenses from focusing on stud running back Johnathan Franklin.

With the addition of Hundley, the Bruins offense has moved from 44th last year to 28th this year in S&P, which focuses more on the explosiveness of individual plays. In FEI, a measure that looks more closely at drive success, UCLA has jumped from 50th to 29th. There's no denying the impact the freshman has had; the increase in explosive plays and drive efficiency has led to two more touchdowns per game.

The Cougars had their chance to face a one-dimensional offense last week, and failed miserably. There will be no such luxury on Saturday, as the Bruins excel in all areas. 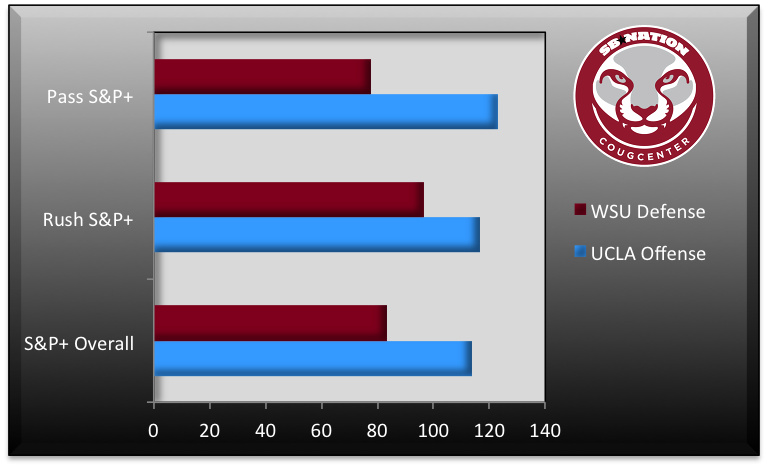 The quarterback improvement may be why the Bruins have improved so much on offense this season, but they are still a run-first team, and Franklin is the star. The senior is strong enough to shed tacklers, quick enough to make guys miss, and fast enough to break open long touchdown runs. He has led the team in rushing all four years at UCLA, and has saved his best for last.

Franklin has already amassed 1,204 rushing yards on just 180 carries, good for a ridiculous 6.7 yards per rush. That's better than Jeff Tuel or Connor Halliday average per pass. Franklin is also a threat to catch a pass, as he has caught 20 balls for 231 yards on the year. His numbers make him fifth nationally with 159.4 yards from scrimmage per game.

Attempting to stack the box and stop Franklin, as the Cougs did against Stepfan Taylor and Stanford, would likely not end well. Hundley has completed 68 percent of his passes and is picking up eight yards per attempt.

Joseph Fauria doesn't have an impressive yardage total - just 347 yards on 27 catches - but he has been a monster in the red zone. Fauria has eight touchdown catches, meaning just about one out of every three of the passes he grabs go for touchdowns. At 6'7, 255, the tight end is a match-up nightmare.

The Bruins' offensive attack is scary because it can burn a defense in a variety of ways, and that has allowed them to be successful in all types of situations. 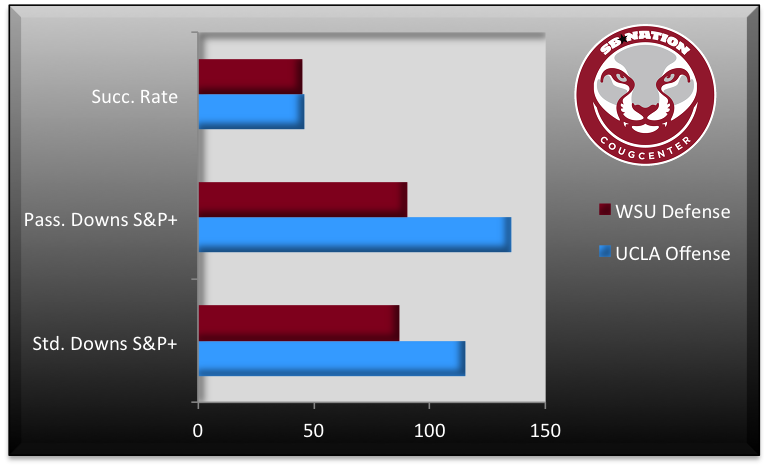 The Bruins have been successful on 46 percent of their plays, which has been enough for them to stay in manageable down and distance situations, leading to a 41 percent third-down conversion rate.

The Cougars have been poor in defending all sorts of downs, and were exploited against Utah last Saturday. They are going to have to show massive improvement, or show that the performance against Stanford wasn't a one-time show, to keep UCLA in difficult situations.

The battle in the trenches is always key, and UCLA's offensive line numbers are a bit of a mixed bag. 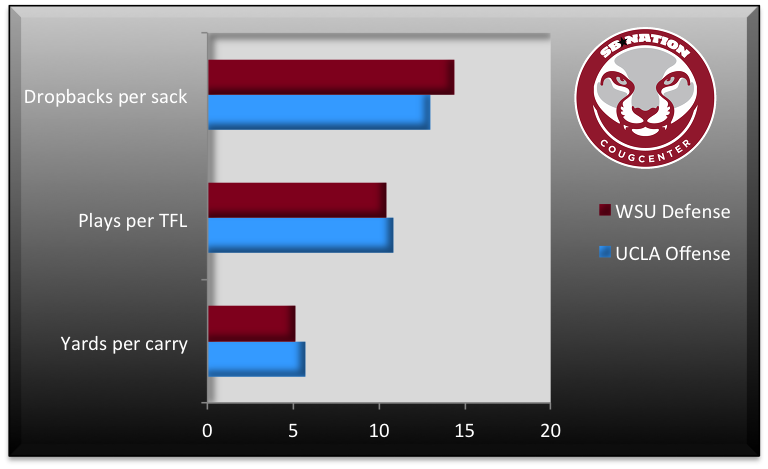 Gaining north of five yards a carry is an excellent number for an offensive front, and it bodes will against a defensive that has allowed five yards a pop on the year. Of course, the Bruins' offensive line may not get all the credit in this case, as Franklin and Hundley are outstanding runners who are able to gain yards after contact.

The tackle for loss and sack numbers tell a much different story for UCLA's O-line. Allowing a play for loss every 10.8 snaps isn't terrible, but it certainly is not good. Giving up a sack every 13 dropbacks also leaves something to be desired. However, just like in the situation where the line doesn't get all the credit for YPC, they don't take all the blame for the sacks. Hundley is a young player, and it is likely that he holds onto the ball a little too long, like many quarterbacks do who have the ability to make plays with their feet.

Still, there is nothing to show that this is a dominant UCLA offensive line, and as always, this is where the Cougars need to make plays. The defensive linemen were called out by Coach Leach after the Utah loss, and it will be interesting to see how they respond against a Bruins front that has its flaws.

Overall, it is not likely that the Cougars will be able to stop UCLA on Saturday. The only way the weather has a huge effect is if there is snow or ice on the Martin Stadium turf, limiting the cuts that Franklin can make. Even if that is the case, Franklin still has the ability to plow through people. Hundley can always burn the Cougars in the passing game if the ground attack was limited in some way.

It doesn't look good for the Cougar defense against the Bruins, and they are going to need a special performance to limit UCLA.