Part two of the UCLA preview looks at a Bruins defense that won't be providing any sort of respite for the Cougars offensive line.

Share All sharing options for: UCLA vs. WSU football preview: Anthony Barr and the Bruins defense

UCLA travels to the Pullman on Saturday to take on the Washington State Cougars, and the Bruins bring with them an attacking front seven. The game will likely be cold, as it takes place at 7:30 p.m. PT on ESPN2, and WSU has to hope that slows down Jim Mora's SoCal squad.

The Bruins offense has made some big strides this season, but that pales in comparison to the leap in effectiveness the defense has made. Last year UCLA was susceptible to explosive plays, as they were 84th in S&P and eight percent worse than an average defense. They were even worse in drive efficiency, as they ranked 111th in FEI.

In 2012, UCLA has jumped to 40th in defensive S&P, and six percent better than average. They've made a shocking leap in FEI, as they are ranked 15th this season. This has led to a drop in eight points allowed per game, even as the Bruins offense has played a faster-paced style.

The Bruins have been good against both the pass and the run, but if there is a glimmer of hope for WSU, they are slightly better in defending the ground game. 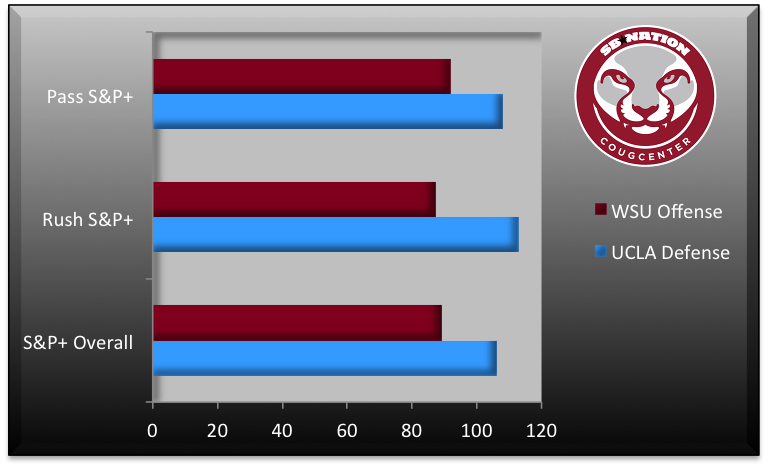 The Bruins are led on defense by sophomore linebacker Erick Kendricks. He is far and away the team-leader in tackles with 87, five of which have been for loss. Kendricks has also broken up three passes and returned a fumble for a touchdown. He'll be all over the field, from defending receivers to blitzing the quarterback.

Cornerback Sheldon Price and the UCLA secondary have been opportunistic. Price has four interceptions, while the group has combined for 12. Andrew Abbott joins Price as a senior in the defensive backfield, and he has logged three picks on the year.

Abbott and Price have been part of a group that has been good in defending obvious passing downs this season, and that's not good for a WSU offense that relies on their ability to make plays in tough situations. 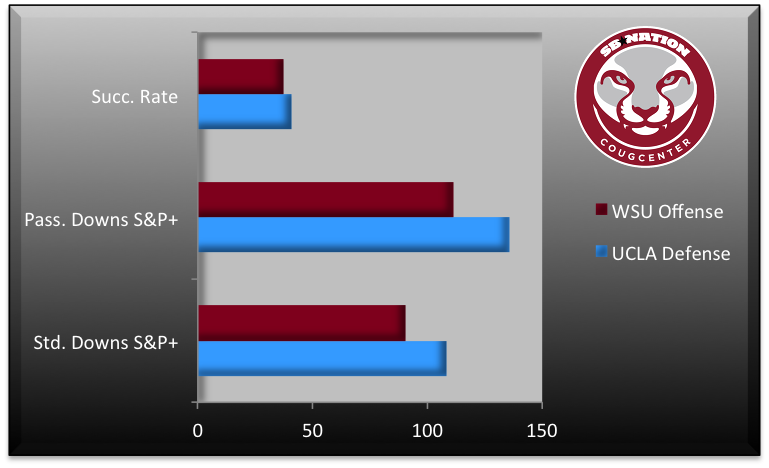 UCLA has been 36 percent better than average in obvious passing downs. Opponents have attempted 63 passes on 3rd down and 4+ to go, and have converted just 13 of those into first downs. The Bruins have been especially stout on 3rd down where there is between seven and nine yards to go. In that situation, UCLA is allowing a just 29 percent completion percentage.

It's been mentioned over and over in these previews, but the only above average part of WSU's game is their ability to perform in obvious passing situations. That is where UCLA is at their best, and that is not good for the Cougs.

WSU has been struggling in standard downs all year. If that trend continues, don't expect the Bruins to let them escape with conversions on 3rd and long.

The secondary isn't the only driving force behind UCLA's ability to lock down in passing situations, the Bruins have a front that can get in the backfield and make plays. 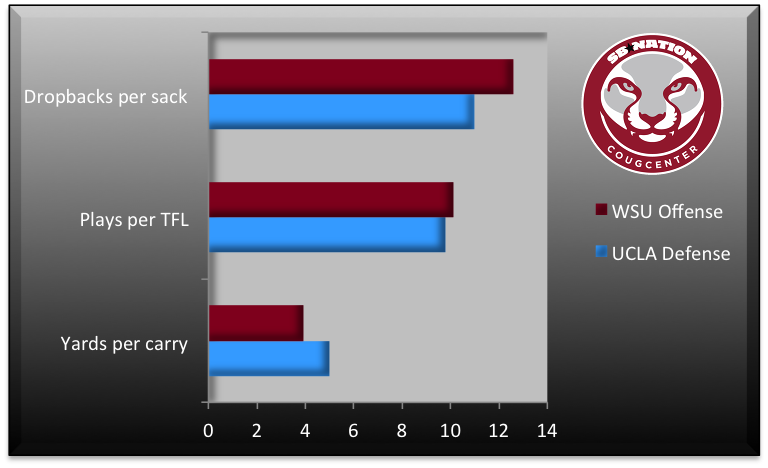 The Bruins defense is bringing down a ball carrier in the backfield once every 9.8 plays, which is even better than what WSU allows. They are also sacking the quarterback once every 11 pass attempts. The matadors-in-training on the Cougars offensive line only allow one every 12.6 attempts.

Jeff Tuel might want to wear some body armor in the chilly temperatures on Saturday night, because he is going to get hit early and often.

Anthony Barr is a linebacker in the Travis Long mold, as he leads the team in sacks and tackles for loss. Barr has eight sacks and 13.5 TFL on the year, so expect to see plenty of him on Saturday. He'll be joined off the edge by defensive end Datone Jones, who has 12 TFL and four sacks.

The Cougars have allowed many, many sacks against some talented fronts in the last two weeks, and they are facing another good one again on Saturday. WSU was able to overcome some of the ineptness from the O-line to move the ball against Stanford, but had no such luck against Utah.

If the UCLA front seven is able to be as disruptive as the Cardinal and Utes, then the Cougars will be in for a long offensive day. If past performances are any indication, that will be the case.

The Cougs seemed to take a step forward on offense against Stanford, only to regress again at Utah. It doesn't seem likely that they will suddenly explode against a talented Bruins squad, but something just as strange happened on Dad's Weekend in 2011.