Pac-12 Odds: Picking Against the Spread for Week 11

Share All sharing options for: Pac-12 Odds: Picking Against the Spread for Week 11

The B-Lot tailgating team met up at a fancy bar in Kirkland; one of those bars that has fifty different beers on tap and they all seem to cost eight dollars. When my beer showed up in a goblet rather than a plastic cup, I took it as the first sign this wasn't going to end well.

While tossing back our pretentious IPA's, we jokingingly paged through the cocktail menu. The idea tossed to the group that if we were somehow winning this game at halftime, we would order a round of the girly-est drink on the menu. After Peppermint Kisses and Coconut Mojitos were thoroughly discussed, we decided on the Bananas Foster Martini, a combination of banana liqueur, a scoop of ice cream and a caramel drizzle.

So John White runs for a 50 yard touchdown, then Utah scores, and again, and again, and again. Somewhere along the way, we stopped watching the game because we've given up on being angry and the conversation delved into ranking the Rocky movies (if you're keeping score at home, #1 is III; accept this), Saved by the Bell trivia and craning our necks to watch the Notre Dame game behind us.

Somewhere around the 42-0 mark, we started admitting to ourselves that we really did want that Bananas Foster Martini. So we revised our expectations to celebrating if we didn't get shut out. So while you may bemoan that last second touchdown pass from Jeff Tuel to Kristoff Williams as meaningless, it did cause quite a stir when the bartender and wait staff judged us all for ordering these: 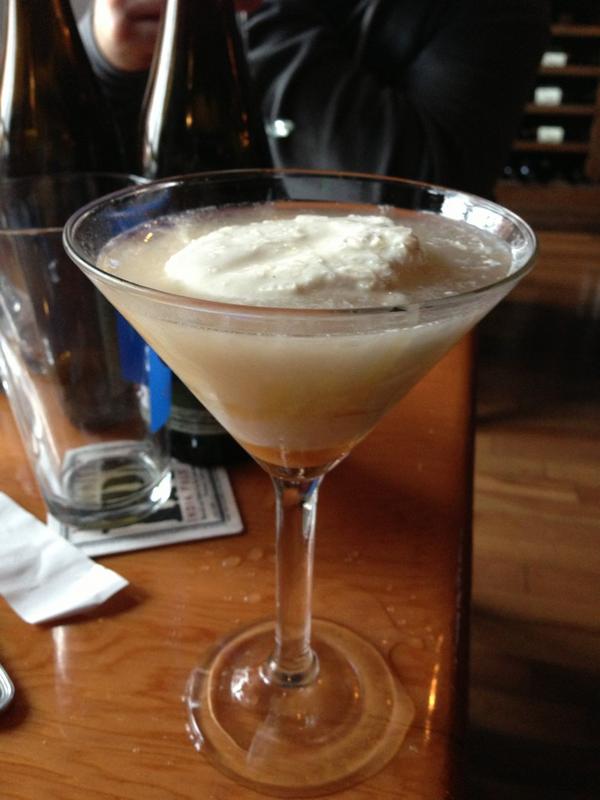 This is what 2012 Cougar football is all about: Hoping the Cougs score once so we can order our ice cream.

On to the picks.

COLORADO (+30.5) at ARIZONA: At this point is there any point spread high enough to make you pick Colorado? I have been pondering this question all week, along with how many Arizona players would have to break their legs this week in order to not cover that 30 points. The other question I've been asking myself is how the hell we lost to that team. Thanks, Coach Leach!

ARIZONA STATE (+9) at USC: The Sun Devils are getting Will Sutton back for this game, and the Trojans are getting back their inflated balls. In their three game losing streak, ASU has given up six touchdown plays of more than 50 yards. Think Robert Woods is fired up for this one? I think USC wins this game, but nine points makes me nervous because I thought this would be a touchdown. I'm going to keep riding the ASU horse and will take them to get within that nine.

OREGON STATE (+4.5) at STANFORD: The interesting part of this game is neither fan base wants to see one down played by their "starting" Quarterback. It appears both Cody Vaz and Kevin Hogan are getting starts because their respective predecessors had complete meltdowns at Century Link Field. It really doesn't matter if I pick Oregon State to win or lose, because I will get this wrong (I am 1-7 picking Beaver games this year). So to my OS friends: rejoice because I take the Trees and give the points.

UTAH (-1) at WASHINGTON: WSU meltdown aside, Utah has been playing some really good football over the past few weeks and seems to be peaking at the right time. That being said, Century Link Field seems to be the place where bad Quarterbacks go to die. Lucky for Utah, John White isn't a quarterback. Take the Utes on the road.

OREGON (-28.5) at CALIFORNIA: Oregon is in style-points mode and Cal has officially hit its freefall. Just like there isn't a spread too high to bet against Colorado, I'm not sure I can bet against the Ducks under any circumstances for the rest of the year. Vegas is probably counting on that. Taking the Ducks.

UCLA (-16) at WASHINGTON STATE: Sigh... Take the Bruins. Does it really matter anymore?

Good luck to you all this week and may you end the weekend with a small fortune, provided you didn't start with a large one.