Flashback Friday: WSU's Jerome Harrison runs all over UCLA in 2004

A fun look back to the battle between the Cougs and Bruins in Pasadena, which WSU won 31-29.

Share All sharing options for: Flashback Friday: WSU's Jerome Harrison runs all over UCLA in 2004

In 2004, Facebook had just launched, Napoleon Dynamite and Mean Girls became massive hits, and Justin Timberlake revealed a little bit too much of Janet Jackson. Our beloved Cougars, under Head Coach Bill Doba, traveled to the Rose Bowl in the midst of a four-game losing streak. The game would not be decided until the final minute.

The Cougs were led by a redshirt freshman who would turn out to be a Cougar great. Quarterback Alex Brink made his third start after being forced into duty once QB Josh Swogger was injured. (Swogger would transfer to Montana the following season as Brink grabbed hold of the job and never let go.)

WSU would go on to defeat UCLA 31-29 that day, but it was not the arm of Brink that would guide the Cougars to victory. It was the legs of junior running back Jerome Harrison that would do the damage.

Harrison finished the day with 247 yards rushing yards and 3 touchdowns on 42 attempts. Yeah, that is not a typo. Harrison's 42 carries are still a school record, and he would only exceed that total once his career (when he put up 260 yards on the Bruins the following season). 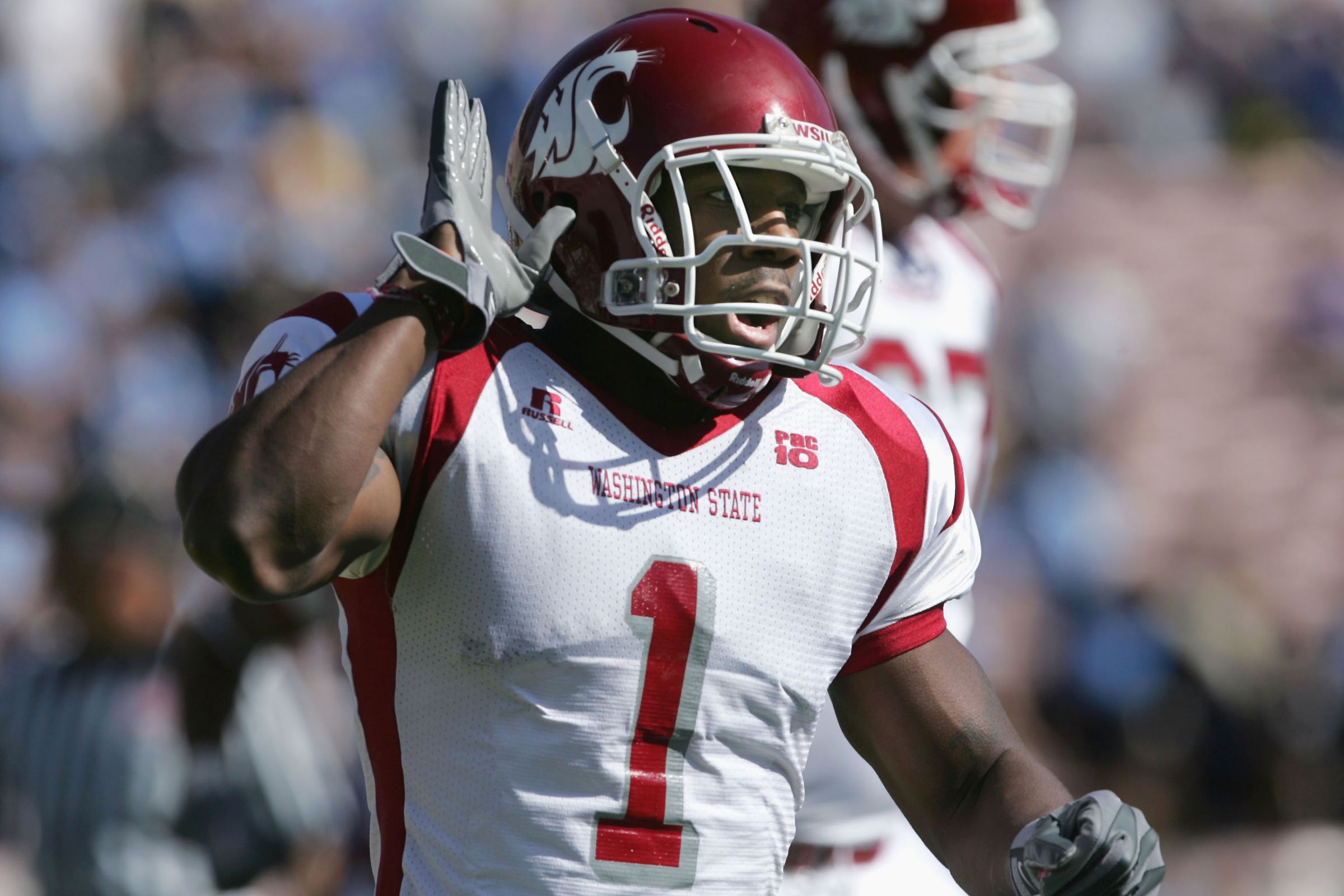 Jerome Harrison celebrates one of his two TDs against UCLA in 2004. (Photo credit: Stephen Dunn/Getty Images)

The Cougar offense gained 506 total yards with 321 of those yards on the ground. The game could not have started better for the Cougars. One play after UCLA fumbled the opening kickoff, Harrison took it to pay dirt from 25 yards out. Harrison's big first quarter would not stop there as he gashed the Bruins' defense for a 45-yard score.

Brink capped off the next WSU drive with a 18-yard screen pass to WR Jason Hill. At halftime, the score was Cougars 21-10, but the Bruins still had fight in them. After both teams traded field goals in the third quarter, the Cougars started the last period of the game by increasing their lead. Brink found Hill for a 56-yard gain, which set-up another Harrison touchdown scamper.

Then the Bruins came battling back. It took just two plays for UCLA to answer WSU's last score of the game as Bruin quarterback Drew Olsen hit wide out Tab Perry for a 47-yard TD. With enough time for one final drive and down 31-23, Olsen and company started their last gasp drive from the UCLA 46 thanks to a nice punt return. With 42 seconds remaining Olsen scrambled and found his running back to bring the game within two-points.

But enough was enough. Olsen rolled to his right looking for an open target but to no avail. As he was hit he hurled the ball to the middle of the field but the pass fell incomplete. The Cougs held off the Bruins and escaped with the win.

If you'd like to watch it, here's what appears to be the coaches' film, courtesy of the WSU library. (There's no sound, but it's still cool.)

Saturday's matchup will be the 60th meeting between the two teams, and UCLA holds the series advantage over WSU 39-19-1. UCLA has also beaten WSU the last five times they have faced off. This will be second time head coaches Jim Mora and Mike Leach go at it since joining their respective teams.

If the Cougars want to come back to Pullman celebrating a win over a top 25 team, Falk and the defense will have to play lights out. This team is hungry and playing with a certain swagger that is exciting to watch. Cannot wait for game day. Go Cougs!