The Cougars are still seeking their first conference win as they head to Salt Lake City this weekend.

Share All sharing options for: WSU vs. Utah football preview: John White and the Utes offense

The Washington State Cougars head to Salt Lake City to take on the Utah Utes on Saturday. Utah has struggled on offense and may provide the WSU defense a chance to show how much they've improved.

The Utes are nowhere near as capable as the Stanford offense that the Cougs faced a week ago, but they are similar in run vs. pass playcalling. Utah's run game hasn't been all that effective, and that has led to some poor offense overall. As the chart below shows, the Utes may be served well to put the ball in the air a little more. As it stands now, they are rushing the ball well over 50 percent of the time. 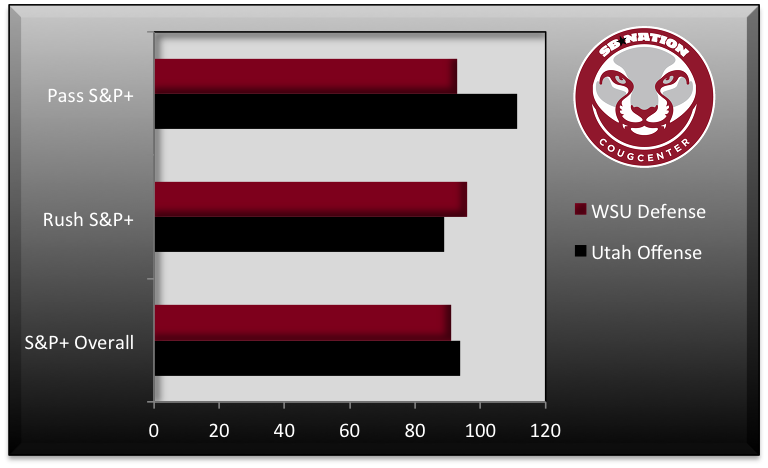 The Cougar defense finally gets a break as they play a below-average offense for the first time since Colorado. The emphasis on the run game has really hurt the Utes, as their star running back has struggled in 2012. John White tore up the Pac-12 last season, but has put up just 3.96 yards per carry this year. That hasn't stopped Utah from feeding him the ball, as White has carried 131 times, which is more than every WSU running back combined.

Freshman quarterback Travis Wilson took over the starting job three games ago against UCLA. He hasn't performed all that well as he gets acquainted to Division I football, throwing four interceptions to just one touchdown in first three starts. Wilson completed 65 percent of his passes, so he can move the offense with some help from the run game.

The passing game has been effective when used, but that may be a product of opponents focusing the lion's share of their efforts on stopping the Utah rushing game. White was finally able to break loose and put up some solid numbers against Cal last week, and the Utes were able to convert short fields into touchdowns.

Don't let those 49 points they threw up on Cal fool you, the offense only score four of those touchdowns, and three of those scoring drives came when Utah started in Cal territory. Two kickoff return TDs and a fumble return for a score boosted the final tally.

Utah's struggling run game has led to a low success rate, and that has set them up in a number of passing situations. Surprisingly, they've been an above average team when a pass is expected. 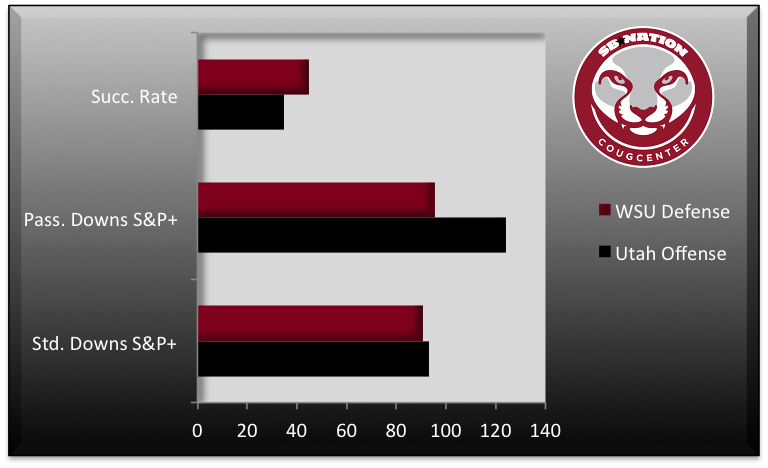 Despite being a team that seems allergic to throwing the ball at times, Utah has been excellent in long situations. The Utes are over 20 percent better than an average team in performance on passing downs.

That passing down performance has been needed, as Utah has been below average on standard downs and hasn't had a high number of successful plays.

Utah's performance on passing downs doesn't bode well for the Cougars, who have struggled to get off the field on third and long. WSU excels when their front seven is called on to make plays, and is hurt when the secondary is asked to cover. The Utes' ability to convert in passing situations is cause for concern.

The WSU front seven has a good chance to make their presence known on Saturday, as evidence by this graph charting the performance of Utah's offensive line. 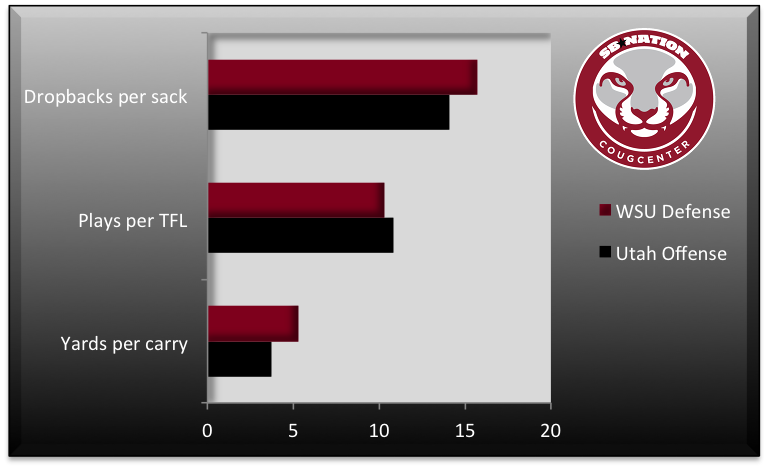 As mentioned several times earlier, the Utes haven't been great at running the ball. That goes beyond the performance of White, as Utah's offensive line has struggled to block well for whoever gets the call.

It's a good thing for the offensive line's sake that Utah doesn't pass more, because they've been letting the quarterbacks get hit. Travis Long has been shut out in the sack department the last two weeks, but he finally may be able to breakthrough against the Utes. Even if he can't record a sack, it seems likely that he will be able to get into the backfield.

Ioane Gauta has been a force on the interior for WSU, and he could have an excellent game against Utah. Their offensive line leaves much to be desired. With the strength of the Cougars front seven, there is a decent chance that the WSU defense shows up with a solid performance here.

The Cougs were able to hold down a run-heavy team last week, and they play a less-talented run-heavy team this week. This will be a good measure of whether-or-not WSU is making strides on the defensive side of the ball. They haven't been able to string together a pair of a good games, and now would be a great time to do that.